This week has given us a tutorial in the visceral power of images. 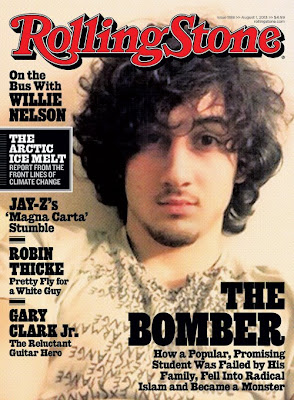 This is the cover of the Rolling Stone, which features a longform article about Dzhokhar Tsarnaev, the (as yet still accused) Boston Marathon bomber.

Then, we have these (separate link). This is the night when he was captured after an extensive manhunt.

Two different images. One that the young man took of himself, trying to show his best face in social media. The other is him defeated.

Which one is the truth?

The picture on the cover of Rolling Stone lit the torch of outrage in many a gut. “This glorifies terrorism!” they scream. “This makes him look like a sexy rock star!” “Boycott, burn, condemn!”

Never mind that the article behind the cover, written by Janet Reitman , neither glamorizes nor glorifies, but tells a relentlessly sad story of a young man, fractured inside, who made a decision that destroyed whatever future he may have enjoyed. Never mind that this same image is only one of three portraits of Dzhokhar that the media uses; it has been seen before, even on the front page of the New York Times.

As for the pictures of the capture, the police photographer who leaked them to the press (and who has been relieved of duty for his trouble), gave this as his motivation:

“I hope that the people who see these images will know that this was real. It was as real as it gets… What Rolling Stone did was wrong. This guy is evil. This is the real Boston bomber. Not someone fluffed and buffed for the cover of Rolling Stone magazine.”


When you look upon those photos, what do you see? A weak, bleeding creature who can barely crawl out of the boat.

The first image says “beauty.” The second set of images says “suffering.” And to some, “martyrdom.”

It is too easy to think of people, things, and events as whole, unalloyed entities.

“This monster is a dirty rotten terrorist who should have been shot in the head as soon as he crawled out of the boat like the worm he is.”

This is a mistake on the part of both RS cover critics and #FreeJahar devotees.

All of us, at the very least, are bifurcated. Trifrucated. Quadrofucated. And more.

I see two distinct individuals: Dzhokhar, the accused bomber with evidence against him. Dzhokhar, who allowed his brother or his religion or his disappointment with life – or all three – to convince him to shatter the peace of a sporting event (we’re lucky that only three died that day). Dzhokhar, whose future is either on the execution table or sixty-plus years in prison (barring an EPIC FAIL by the prosecution).

And Jahar. Jahar, the gentle son, the low-key athlete, the loyal friend, the charming Tweeter. And, to some, a boyfriend to dream of. Someone to hold hands in the park with, ride in the county fair Ferris wheel with, watch the stars on the top of the car with, snuggle on the couch and binge-watch TV with. Someone to kiss, someone to hold. Someone to melt into, making each other’s body sing.

How easy it is to remember the face of Jahar and spin him into a fictional romantic hero. Real Person (fan fiction) Stories, or RPS, about Jahar have appeared online. The best of these are on Wattpad – here, here, and here. I expect to see more, perhaps in mainstream publishing, with Jahar carrying another name – hidden from all but those who understand.

This is the only way to free Jahar. Write the Jahar who is in your heart. Use your words to give him a happy future with love and hope.

Don’t bet your life on Dzhokhar being free in the real world.

Posted by Jennie Brown Hakim at 4:58 PM No comments:

What are humanity’s three deadliest inventions?

How about religion, race, and nationality?

The first three are tools. The second three are ideas.

Ideas that have no concrete base in reality.

It is deadly ideas that influence people to pick up deadly tools. If you don’t believe me, read a history book or two. Or just turn on the news.

Some believe that religion, race, and nationality unite people. They don’t. They divide.

When you feel that you belong to a religion, race, or nationality, it is hard not to believe that your group is better than all others. In order for your group to be better, other groups have to be worse.

At best, this is an attitude of prejudice. At worst, it leads to war and the loss of millions of lives, the destruction of communities, and anger that, of course, leads to more war.

Some of you out there don't think you can live without these things.

Without my religion, I would not know how to be a good person.

Without my race, I wouldn’t have a place to belong.

Without my nationality, I wouldn’t have something bigger than myself to believe in.

You can have all of those things without religion, race, and/or nationality.

Good without a god. Belonging without discriminating by skin color. A cause without a nation.

It's about damn time we start.

Posted by Jennie Brown Hakim at 3:30 PM No comments:

It eats your life

Not too long ago, I was listening to one of my favorite podcasts, “The Karel Show.” Karel was talking about how one of his radio mentors gave him this advice: start your show with the topic that’s most important to you at this moment – whether or not it’s in the news.

That makes sense. When the host cares passionately about the subject, it makes for compelling radio.

I am sure the same goes for blogs. I see a recurring theme in another of my favorite podcasts, “Blogcast FM”: write about what’s important to you, even if it’s scary or controversial or emotional (or all of the above).

As you can tell, I missed my post quota for the month of June, and July is nearly one-third over and I still haven’t posted. Why?

I have been living in the real world less than half the time lately. Sometimes it’s like I’m only 10% in reality and 90% in –

Let me find the right words.

This is still a public blog. I need, and want, to approach the subject obliquely.

I know my husband does not read this blog. But there’s a first time for everything.

Let’s give this a name: Damn Trouble.

Damn Trouble is in my head, eating up most of the other thoughts that usually reside there. Thoughts of business and new ideas and creativity and beauty and photography and walking and travel and trains and books and authors and podcasts and good food and friends and family.

Damn Trouble is dangerous – I know it is – but it’s sexy and exciting and thrilling and gives me a break from my utterly boring real life.

Damn Trouble compels me to Google it and try to gather as much information about it as possible – and when I find all of the information, I Google again because I just like reading about it, like when I was six and collected multiple “Cinderella” books.

Damn Trouble is a damn problem, that's for sure.

Now, the wild and crazy ideas are coming – ideas which may very well fit in with the new edgy, sexually explicit novels which are popular these days. Who knows…letting Damn Trouble come out and play in a healthy way could solve more than one problem for us.

That’s the way to beat it.

Posted by Jennie Brown Hakim at 12:04 PM No comments: