TV shows that should not be remade 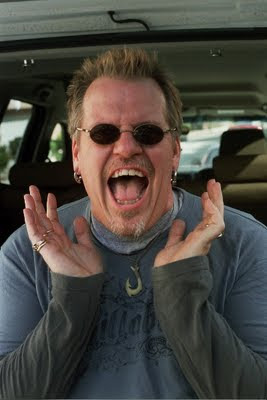 The Karel Show is my favorite radio show, even though I can listen to it only through downloads (and days after the original broadcast). It’s hard for me to describe it in few words – let me just say it’s politics, it’s outrage, it’s comedy, it’s humanity, it’s life.

Karel is on KGO-AM 810 in San Francisco and on various markets during the week. You can listen to and download Karel here (KGO) and here (weekdays).

On the May 15th program, Karel brought up the topic of television shows that were so good the first time that it’s bad form to remake them. ABC is going to bring out a new set of Charlie’s Angels this fall, and Karel wasn’t jiggy with it. “They should just show the repeat of Farrah, and Kate, and Jaclyn,” he declared. Other listeners cited The Love Boat, Good Times, Sanford and Son, Three’s Company, and I Love Lucy.

Karel also brought up Gilligan’s Island. Now, I watched my fair share of Gilligan, mostly when my age was a single digit, but I can’t say it was one of my favorite shows. Still, it would be a hard one to remake. Can you imagine three single guys, two single gals, and one married couple stuck on an uncharted desert isle – and nobody’s having sex? Bring that premise to 2011, and having sex is all they’re going to do.

After thinking about it, my show that should not be remade is Batman. It’s pitch-perfect camp sensibility is a pure product of its debut year, 1966. Today’s showrunners would load down the camp with enough irony to suffocate the humor. That would not be a pretty sight. 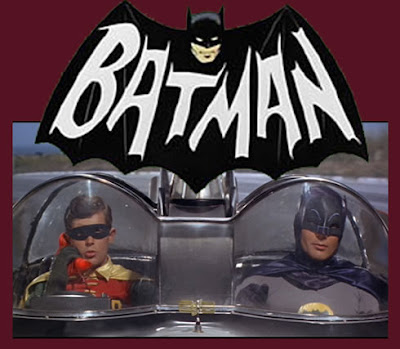 (I wish I could encourage you to go out and buy the Batman series on DVD. Unfortunately, it’s not available on DVD – unlike lesser shows such as Punky Brewster and Tyler Perry’s House of Payne – because of various and sundry and tangled reasons. I can’t understand why these people are caging a golden goose – I know I’m not the only one who would run, not walk, to the store to get Batman. Let’s hope they can get together and put this series out, not just in my lifetime, but in Adam West’s – we need his commentary! At least we have a feature film which will show you the tenor of the series.)

Are there any other shows that you think the remakers should keep their greedy little paws off of? Feel free to comment below!

And speaking of Jughead...

Did you know that his real name is Forsythe Pendleton Jones III?

I can’t decide which one is worse.

(At least he didn’t spell “Jughead” with two “g”s!)
Posted by Jennie Brown Hakim at 6:47 PM No comments:

A journey to the Zonk World of Jughead 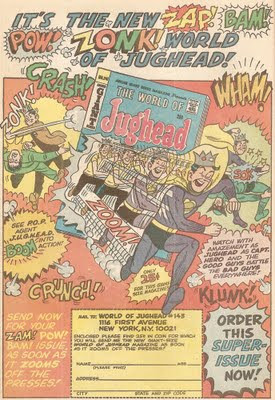 A timely visit to a local flea market re-introduced me to the mad side of Archie Comics, specifically the October 1966 issue of Archie’s Mad House. In Batman-crazy 1966, everybody knew that when super hero fist met super villain jaw, it was the birth of a starburst with a colorful three- or four-letter word inside. And we knew that all superheroes wore their underpants outside of their tights (why, we’re still trying to figure out). 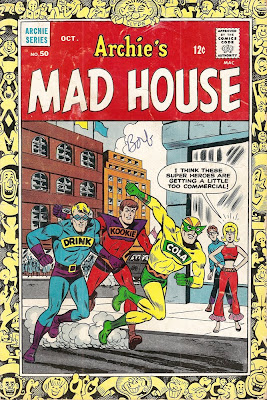 In this goofball alternate Archie universe, Archie became Pureheart the Powerful, Betty was Superteen, Reggie (who else?) was Evilheart, and Jughead was a Captain Hero with a hamburger crest. 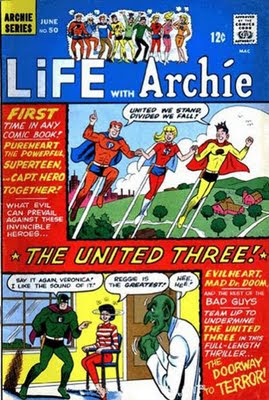 I like books that make me ask questions, and these ones give me a pair:

1. How did Jughead get so buff in his Captain Hero uniform? I hope it’s just good old-fashioned carnivorism, because I don’t want to think that Jughead’s ordering from the Barry Bonds menu. 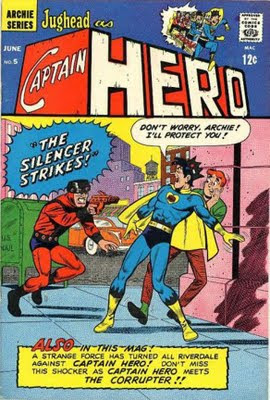 2. Even in cape, tights, and outside underpants, Jughead just won’t take off that damn hat. You probably never, ever saw anyone in real life wear a hat like this, unless you are over eighty years old. (Though I would rather see teens wear Jughead hats than, say, tattoos.)

For more about the Archie superheroes, visit this informative link at the comic book site Dial B for Blog. Be prepared to spend some time – I was up past midnight last night looking at the “Sickest Covers of All Time” and reading the saga of Scooter, a Beatle look-alike who invited us to swing with him. On his scooter. 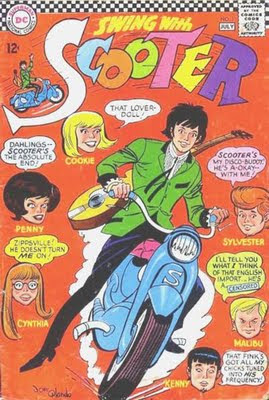 It’s so fun to read a comic book that doesn’t drop a boulder of dark, dank, depressing issues on you, don’t you think? I can’t wait for the Archie’s Mad House book which will be released this July – just in time for my birthday (hint, hint).
Posted by Jennie Brown Hakim at 10:59 AM No comments:

To everyone who thought the world was going to end today...

A time to reflect…not celebrate

Last Sunday (May 1st), U.S. forces found and killed Osama bin Laden in a mansion in Pakistan. Bin Laden was the head of Al-Qaeda, who carried out the terrorist attack on America on September 11, 2001. From then until the hour of his death, bin Laden was the face of terrorism for many Americans, a shadowy and frustrating enemy lurking in the darkness of a world not our own.

When word came of the dispatching of bin Laden, New York’s Times Square filled with cheering people. New York, of course, was particularly targeted on 9/11 via the World Trade Center Twin Towers. 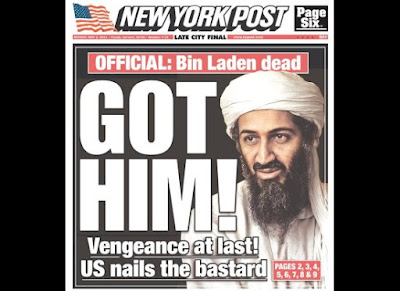 The shooting of bin Laden is the inevitable end to a tragically wasted life. With the resources he was born with, bin Laden could have been a force for good, showing people the best side of Islam instead of dragging it into a pit of revenge and violence. He chose a life of violence, and in the end he reaped what he had sown.

It’s hard to compare this to the end of World War II. Back then, we knew we had ended a particular villainy, and it meant the return of so many more troops and the renewing of a prosperous way of life that the war interrupted. Here, we do not know when our troops will come home (though they probably should with no clear mission now), and national prosperity remains uncertain. The “war” on terrorism will continue, though it may never be definitively won.

One villain gone, a few more to go.
Posted by Jennie Brown Hakim at 4:00 PM No comments: