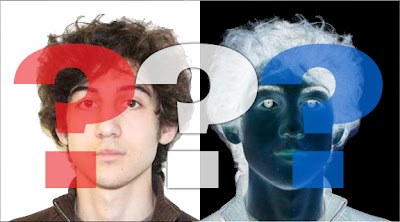 Have you ever had a question inside that is maddeningly puzzling?

You ponder and study and woolgather, but you are no closer to an answer that you were when you started.

Here is the question, and I’m not the only one asking it:

Why did Dzhokhar Tsarnaev participate in the Boston Marathon bombings?

What could make an uber-normal nineteen-year old college student, loving junk food and rap and sports (according to his now-abandoned Twitter account) place a pressure cooker bomb on a crowded sidewalk? When those bombs went off, they weren’t going to start tickling people.

Unlike Osama bin Laden, or the blood-stained men who conducted the Woolwich attack, Dzhokhar is one of us. An American, literally (a naturalized citizen) as well as figuratively.

What made you do it, Dzhokhar?

Did you look up to your big brother too much? Did he bully you into it – or worse?

To some, the answer to this question is already settled: Dzhokhar didn’t do it. Period.

These are the #FreeJahar folk. To read their Tumblrs is to dive into a heady bouillabaisse of sweet infatuation and wishful-thinking conspiracy theories.

Some other people, those with hair-trigger outrage, say that the #FreeJaharists should be thrown out of America. Or have the U.S. government keep watch on them (more than it already does). Some even point to this as proof that women should never have received the right to vote. (Ah, you wise men, you.)

I believe the #FreeJaharists are not evil; they are not saying, “yay, terrorism!” but throwing themselves into “saving” a boy close to their own age because it gives them a purpose outside themselves. They are simply naïve and in denial (and seriously, who among us has never been either?) When more facts see the light of day – and they will, in time – most of the #FreeJaharists will look back on this period in their lives with a blush of embarrassment. No further consequences are necessary.

As I said before, we must judge this young man by the facts we will discover about him. All of the facts, the good and the bad. If we find out that Dzhokhar genuinely believed that using a weapon of mass destruction to kill people was the best way to get his message across – he will be sentenced to die. If there are serious mitigating circumstances, and if he is genuinely remorseful – given America’s attitude towards terrorism, he will spend the rest of his life in prison. When you’re nineteen, that’s a long, long time.

That is why I keep asking the question: this heartbreaking waste of a life is one more tragedy of the Boston Marathon bombings.
Posted by Jennie Brown Hakim at 12:47 PM No comments:


OC Weekly is Orange County’s alternative to the mainstream media, and more often than not it shines a necessary light on the dark side of our happy shiny land  -- it keeps a sharp eye on political and police corruption.

In the May 31st issue (available free all around O.C. and online), we have a curious cover story titled “Where The Black People At?” 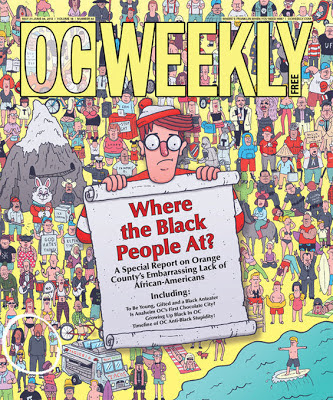 The title is based on a joke in Blazing Saddles (I won’t spoil it for you if, amazingly, you haven’t seen the movie yet), but the dialect might offend those who don’t know the reference. My issue with the story goes well beyond wording, however.

The author, Gustavo Arellano, claims that a black population of a “pathetically low” 2.1 percent is the “worst” embarrassment in O.C. (Worse than the Kelly Thomas case?)

In comparison, the black percentage is 13.1 in the entire United States, 6.6 in the state of California, and 9.3 in neighboring Los Angeles County. Black population varies throughout the United States, from 37.3 in Mississippi to 0.67 in Montana.

Why does Orange County’s 2.1 percent matter?

“Because,” says Gustavo, “the harvest of such a pathetic situation bears its bitter fruit seemingly every year, with juvenile incidents that make us the butt of the national media again and again, incidents that can only originate from people who grew up or live without black people around them.”

Hmmm. Mississippi, the state with the highest percentage of blacks in the U.S., was and is remarkably free of racism. Right?

It’s true that Orange County has its shameful history of stupid racists being racist – just like every other well-to-moderately populated county in the United States.

Then, Gustavo concludes with a paragraph that makes me cringe:

“Our goal for this issue? Read our stories. Learn your history. Be embarrassed that we have such a minuscule African-American community. Then do something about it—that part, we leave to you. Oh, and the other major metro area with a black community of less than 5 percent? Portland, Oregon—its African-American community sits at 2.9 percent. Surely, we can do better than those hipster douchebags, right?”

I say this as a proud progressive: A recurring problem in progressive media is a willingness to go on and on about problems without providing any hint of an actionable solution. What is the average OC Weekly reader (or for that matter, the average Portland, Oregon resident) supposed to do to help increase black population – without coming off as condescending? And what percentage would we have to get to before Gustavo is happy? 4%? 8%? 25%?

I am tired of Crayola-box sociology. Let’s find all the white people, the black people, the brown and yellow and red people! Let’s sort them out, count them all, and act like it’s the first thing that matters.

Do you know what numbers I care about more?

How many freelancers are in Orange County? How many Star Trek fans? How many people who care about good taste?

How many are doing their best to do the right thing?

Where are the good people?

(The right question, asked the right way.)
Posted by Jennie Brown Hakim at 11:12 AM No comments: