The trouble with networking 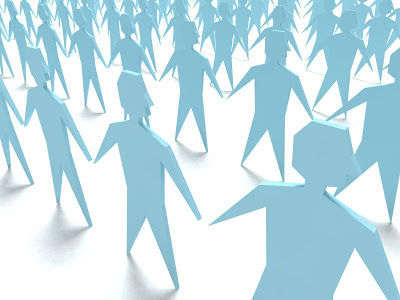 “Networking” is a cold word. It sounds creepy, impersonal, and exploitative – and too often, that’s the way it plays out in real life.

How many career advice pages practically order you to go to networking events?

How many do you actually go to?

Have you found that they can take a big bite out of your budget (very few networking events are totally free)?

How much business have you gotten because of your attendance at networking events?

Have you met many (or even any) people who could be viable clients at networking events?

Have you seen too many job-seekers and not enough (if any) job-givers at networking events?

Do you feel guilty about asking successful people for help because you think you have nothing to offer them in return?

Do you collect other people’s business cards, then look at them the next day and wonder what the hell you should do next?

If you have gotten business because of a networking event, do you feel that you’ve earned it, or do you just feel you lucked out?

Do you feel that traditional, in-person networking events favor people who are loquacious, on the “E” side of Myers-Briggs? What happens if socializing with strangers drains you, or you’re the kind of person who doesn’t want to speak unless there’s a good reason to?

What else can you do to gain new business – with the people who can use your help the most?

Anyone?
Posted by Jennie Brown Hakim at 7:46 PM 5 comments:

(I was going through some of my old Microsoft Works files and found this list, which someone e-mailed me in the mid-2000s. I think it’s worth sharing with you…especially if you understand!)

Yunz are from Picksburgh if...

You didn't have a spring break in high school.

You walk carefully when it is "slippy" outside.

You often go down to the "crick."

You've told your children to "red up" their rooms.

You can remember telling your little brother/sister to stop being so "nebby."

You've gotten hurt by falling into a "jaggerbush."

Your mother or grandmother has been seen wearing a "babushka" on her head.
q
You've "warshed" the clothes.

I ask you to hand me one of those "Gum-Bands" and you actually know what I'm talking about.

You know you can't drive too fast on the back roads, because of the deer.

You know Beaver Valley, Turtle Creek, Moon, Mars, Slippery Rock, Greentree and New Castle are names of towns (and you've been to most, if not all, of them.)

A girl walks up to three of her girlfriends and says, “HEY, YUNZ GUYS!"

You hear "you guyses," and don't think twice. (Example..."you guyses house is nice.")

You know the Three Rivers by name and understand that "The Point" isn't just on a writing instrument.

Someone refers to "The Mon" or "The Yough" and you know exactly what they're talking about.

You remember the blizzard of 1994 (or 1976, or 1939, or...) and remember not being able to go outside because the snow was over your head and you would have suffocated.

Someone starts the chant, "Here we go Still-ers!" and you join in. In the proper cadence. Waving the appropriately colored towel.

Bob Prince and "There's a bug loose on the rug" hold special meaning for you.

You've either eaten a Farkleberry Tart or know someone who has.

You drink pop, eat hoagies, love perogies and one of your favorite sandwiches actually has French fries ON it.

You know what a "still mill" is.

You know what Eat 'N Park is and frequently ate breakfast there at 2:00 AM after the bar closed and made fun of people.

You order "dippy eggs" in a restaurant and get exactly what you wanted.

You spent your summers, or a school picnic, at Kennywood, Sand Castle, or Idlewild.

You've been to the Braun's Bread Plant or Story Book Forest for a school field trip.

"Chipped ham" was always in your refrigerator when you were growin up.

You refuse to buy any condiments besides Heinz unless a Pittsburgh athlete's picture is on the side of the container.

Franco, Roberto, and Mario don't need last names and you can recite their exploits by heart.

Your last name has 8 or more letters in it (and you either have a 'Z,' 'U' or a 'ski' somewhere in there) and nobody can pronounce it. And oft times, even if your name has fewer letters, folks still can't pronounce it.

You'll send this on to family and friends who used to live in the Pittsburgh Area as well as to those who have never lived there, just so they can appreciate how different western PA really is!

I wonder how many of Yunz guys actually understood all dat?

Some people just don’t get dem things.
Posted by Jennie Brown Hakim at 2:36 PM No comments:

Let’s start this off with an admission I take pride in: I do not watch much television. I would be happy to only turn on the television when I actually made a conscious choice to sit down and watch a program. I don’t like passive watching, or watching for no good reason.

From Harlan Ellison, I learned Sturgeon’s Law (by science fiction writer Theodore Sturgeon): 90% of anything, whether it be television, movies, music, or books, is crap. In the case of television, I think the crap ratio may be higher than that. (Or maybe that’s the book lover in me talking.)

These days, I wake up at around 7 a.m., even on weekends. I want to know what is going on, so I turn on a morning news show. At 7 a.m., it’s always CBS This Morning. 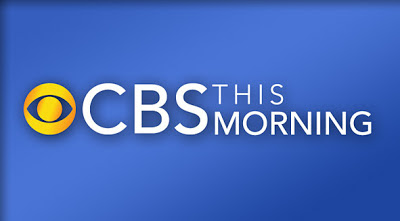 Well, I can explain it using S-sounds, because I’m a punner at heart: 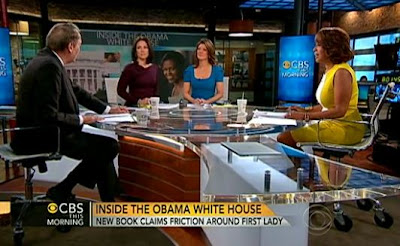 See-Bee-Ess (CBS) This Morning contains Solid news, Substance, and Smarts. It is not Salacious, Sensational, Stuffed with Sell-ebrities, or often Stupid like the other two network morning Shows.

And that, Sadly, is why CBS This Morning is third in the ratings.

But is that such an awful fate?

CBS This Morning gives what the other two shows do not. It has a loyal audience who would not be happy if it changed too much.

In business, I would rather offer good quality, and have a small yet devoted audience, than dumb down the content for the sake of popularity – and then no longer be proud of my product.

I’d rather be a Sturgeon 10 Percenter, thank you very much.
Posted by Jennie Brown Hakim at 2:28 PM No comments:

When was the last time you saw.... 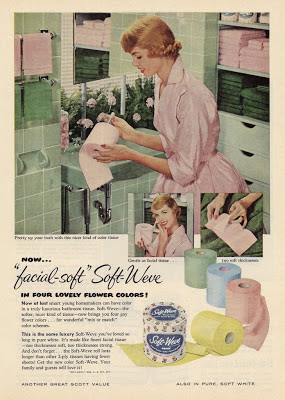 I remember when Charmin came in pink, blue, and yellow as well as white. It was nice to have bathroom tissue which was part of the decor, wasn't it? (Come on, scientists, let's discover some non-toxic paper dyes!)
Posted by Jennie Brown Hakim at 5:36 PM No comments: