A little story you must read

I read this small piece by Paulo Coelho in the June 2011 issue of Ode magazine. The last line made me scream (inside) “Yes!”

Who is to blame

A couple went on vacation. When they returned, they found that their home had been burglarized. The robbers had taken everything they owned.

The husband blamed the wife, saying the doors had not been secured. She affirmed that he had forgotten to lock them. A long discussion took place, until the neighbors called a priest to calm the couple down.

“It is her fault. She has always been negligent,” said the husband loudly.

“No, it is his fault. He never pays attention to what he does,” answered the wife.

“One moment,” said the priest. “We are always blaming one another for things we never did, and we end up carrying a burden that does not belong to us. Did it occur to you that the robbers are the ones to blame?”

YES!
Posted by Jennie Brown Hakim at 7:41 PM No comments:

WTF? of the month

Peter Moskos, an assistant professor of law, police science, and criminal justice administration at John Jay College of Criminal Justice in New York City (a strange name for a college, but that’s the least offensive aspect of this story) has written a book called In Defense of Flogging. No, it’s not a love letter to BDSM. As a cure for prison overcrowding, Moskos says it’s time to bring back the practice of flogging convicts (except for the ones which must be imprisoned to protect the public) in lieu of a prison sentence. The convict would have a choice, say, between ten lashes or five years.

Unlike Jonathan Swift in A Modest Proposal, Moskos is not messing with our heads.

In an interview on CNN’s “In the Arena” blog, Moskos says that one benefit of flogging is that it’s “cheaper” than incarceration. I can tell you what's even cheaper – releasing everyone who is in jail just for using/possessing/selling drugs, and decriminalizing drugs altogether.

Here is the flogging process, according to Moskos (reader discretion is advised):

I propose we flog as they do in Singapore and Malaysia. Basically, they tie a person to a large flogging stand, pull down the pants, protect the vital organs and lash the behind with a rattan cane. A doctor tends to the wounds. It’s a horrible, brutal, and bloody process. But it is over in a few minutes.

Does American justice need a “horrible, brutal, and bloody process” that leaves scars that last a lifetime? Does this bring to mind the awful old days of slavery? (Can you imagine white prison guards flogging black convicts?) 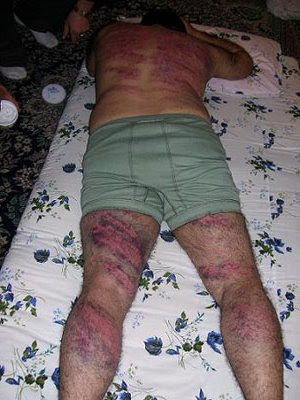 The results of flogging

During the years when flogging/whipping was a common punishment in America’s prisons, black people were treated like a plague through segregation laws, women were under the thumb of an insanely repressive social code, and if you were a child being raped by a father (both the literal and the Heavenly kind), you had no recourse whatsoever. The future is supposed to be better than the past, right?

Whether or not anyone would choose flogging over prison (I frankly doubt that most people would) is beside the point. America is (supposedly) a civilized country. Civilized countries do not flog their citizens. I don’t care how clean the streets of Singapore are. Moskos says that it’s “facile” to think that flogging is too cruel to consider.