Odd facts about me

I was going to put this on my official website (coming soon, really, and I will let you know when), but then I decided that MM was a more appropriate venue:

1. I can’t stand the sight of food that is shaped like small balls. That means peas, capers, garbanzo beans, melon balls, Kix, Trix, Cocoa Puffs, etc. It doesn’t matter how these foods taste, if they come in the form of small balls, I won’t even look at them, much less taste them. (Strangely enough, caviar is the exception to this rule.) Don’t ask me why I feel this way.

2. Cinnamon Crunch (a spinoff of Cap’n Crunch) was my favorite childhood cereal. I have heard that Cinnamon Crunch is despised in other circles. I can’t understand why. Then again, I am far from being Ms. Average. If I were editor of People magazine, I would choose Steve Buscemi as the Sexiest Man Alive. (Actually, the sexiest man alive is my husband, but I don’t want to share him with the world!)

3. I like to watch intermission snipes – the short films shown between double features at drive-in theaters. These are not the same as trailers (previews of upcoming films). Intermission snipes welcomed the “folks” to the drive-in, reminded them to turn their headlights off while parking, put their speakers back on the post before leaving, and, most importantly, exhorted them to rush to the concession stand for popcorn, hot dogs, hamburgers, candy, and sodas (sorry, vegans, no steamed broccoli). It’s more than nostalgia for the Big Three pop cultural decades – the 1950s, the 1960s, and the 1970s. I also like the non-narrative quality of these films. No violence, no tragedy, no upsetting surprises – just the good news about the good food. Go to The Drive-In Exchange to find intermission DVDs and other groovy drive-in stuff. (I bought the complete "It's Intermission Time!" collection of snipes last summer, and it was one of the best purchases I made all year.)

4. I won’t eat whole tomatoes, but I like ketchup (Heinz only), pizza sauce, and tomato paste.

5. I like orange and lemon candies far better than red ones. I’d even choose a lime Life-Saver over a cherry one. (I told you I wasn’t Ms. Average!)

6. I haven’t had this in years, but my favorite sandwich is bacon pieces, snapped in half, inside one slice of a white, fluffy bread (such as Wonder) folded in half. Michal Pollan would not approve, but this is a delightful taste treat.

7. Don’t ask me why most of this list is about food.

8. My favorite attractions at Disneyland were (and I use the “were” purposefully; these all all extinct) Adventure Through Inner Space (the ride which “shrank” you to the size of an atom), and the America the Beautiful film shown in Circarama. I also like visiting the RV and houseboat exhibits at the fair. I don’t like rides that drop you down and spin you around and turn you upside down. But I do like to watch.
Posted by Jennie Brown Hakim at 8:17 PM No comments:

Labels: odd facts about me

Environmental news usually comes in three flavors these days: bad, worse, and stupid (such as KFI-AM’s John and Ken’s grating denial of climate change). It’s gotten so that I reflexively turn away from mainstream environmental news – yes, I know it sounds bad, but it’s a human instinct to flee from the apocalypse.

Then I read an interview with Alex Steffen, creator of the “bright green” environmental group Worldchanging, in the April 2010 issue of The Sun magazine.

According to Steffen, we can stem the tide of environmental degradation - without regressing to a primitive, pre-technological lifestyle – by living in denser communities where nearly everything that people need (work, school, stores, etc.) is within walking or biking distance. A can-do attitude is key, he says:

Despair and cynicism are a large part of what’s preventing us from solving our problems. Among my more political friends, optimism is seen as something you have before you find out the truth. But I think choosing optimism says to your opponents, “I can see a better way of doing this.” We can rally people around a vision of a better future for ourselves and our grandkids and our great-grandkids.

What would you do if you were convinced that a situation is absolutely beyond your repair? Would you keep working to change it – or would you throw up your hands and say, “Why bother?”

Our precious Earth doesn’t need “why bother.” It needs solutions, and solutions only arise from minds that believe they exist. The dense communities (and “dense” does not mean overcrowded) that Steffen proposes will give people more time, more health, more freedom, and more hope.

I recommend that you read the whole interview. The Sun is not easy to find at newsstands (though I have seen it at the Borders in Tustin Legacy); you can order individual issues at its website.(And if you like what you read, why not subscribe?)
Posted by Jennie Brown Hakim at 8:07 PM No comments:

1. shows older movies, most often on a two-or-three-night basis,
2. plays so-called “midnight movies” on Friday and Saturday nights (see MM post of 6/17/09), and
3. has a colorful flyer that you can pick up near its box office,

then for the love of Rocky Horror, go there as often as you can!!!

If you are reading this blog and you have a revival theater in your town, do not forget how lucky you are. Think of people like your Meandering Mouse, who do not have such theaters within reasonable driving distance.

A revival theater is an asset to the community. Never mind that Netflix now allows people from Yuma, AZ to Washington, PA to see films like Cleo from 5 to 7 and The Seventh Seal. I enjoy home viewing as much as anyone, but the experience of sitting in a theater that has braved the ravages of time (for most revival theaters are of the vintage sort), on seats with threadbare velvet in all the right spots, looking to your left and to your right and feeling the comfort of being in a community that can appreciate and love films that are more than 30 years old (that means 1980, now) - you haven't lived until you've been there.

Once upon a time, I was lucky enough to live within walking distance (yeah!) of a really fab revival theater, the Fox Venice. At the Fox, I enjoyed a panorama of exotic films, from Allegro non Troppo to 200 Motels to The Exorcist to The Groove Tube. The other great part about the Fox was its daring concession stand – it’s where I tried a particularly tasty carob bar. (Raise your hand if you ever bought a carob bar at the concession stand.)

Unfortunately, the Fox Venice closed in 1988. The building still stands, but it’s now a swap meet, a repository of worthless things instead of worthwhile movies. (Sing along with me: “We don’t need another swap meet…”) I think that is neither fair nor square. I know I’m not the only one who would glow like a firefly if a revival theater came to be in OC.

It’s hard to imagine a revival theater in a multiplex. It should have one screen, or (at most) two. I considered the Lido Theater in Newport Beach and the South Coast Cinema in Laguna Beach as possible sites, but the drawback of both locations is the availability (or, more accurately, the lack thereof) of parking.

Here would be a great location for a revival theater: 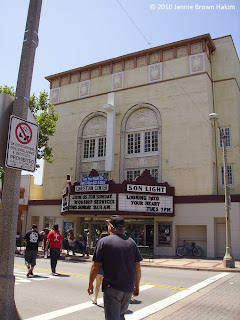 Yes, I know that this property is already occupied by an institution called the Son Light Church. You will have to agree with me, though, that Orange County has enough churches (“We don’t need another church…”) and not nearly enough revival-worthy theaters. I want to live to see the day when this building is once again used for the purpose for which it was built, and in doing so raise both the IQ and the CQ (Cool Quotient) of the Orange Plaza.

What say you, Orange County? Where is the best spot for our revival paradise?
Posted by Jennie Brown Hakim at 7:54 PM 2 comments:

Let's not live in an "Idiocracy"

This week, Two Dogs and I watched the movie Idiocracy on DVD. It was directed and co-written by Mike Judge, the creator of "Beavis and Butt-Head" and "King of the Hill" (note: the next time you watch KOTH, notice that the characters have five fingers on each hand, not four. Just like real people.)

Without spoiling it too much, it shows what could eventually happen when crassness, grossness, and lack of craftsmanship overwhelm a culture. It's funny, but it is scary as well. Once you're finished watching it, you're going to want to read a good, complex book with real meat on its bones. And I'm not talking about this one: 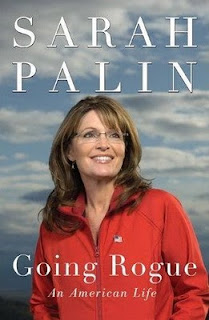 Posted by Jennie Brown Hakim at 8:14 PM No comments:

Q: So why haven’t you been blogging lately, Jennie?

A: You know, that is an excellent question.

Q: That is far from an excellent answer. You only wrote one post in March. You ought to know that real bloggers post at least several times a week.

Q: You’re being more evasive than a cat on bath day. Why haven’t you been sharing your wit with the fans lately?

A: I hope there are still fans out there! Please be patient, fans. I can explain my lack of posting thusly:

None of the above really help me create new blog posts. But today, I have figured out what does: Finding a project and working on it.

Such as my “buzz piece”, as the authors of The Wealthy Freelancer suggest I create. (I just finished the book – excellent reading!) Or the personal website that is just about finished on Adobe Dreamweaver (don’t worry, I will announce when the site goes live). Or new business cards that match the design scheme of my buzz piece.

I believe that it takes awareness, and then action, to pull yourself out of a rut. Action without awareness usually ends up as just another trip to the grocery store. Awareness without action is just watching the wheels inside your head. Bring the two together, and good things start to happen. Just like now. Behold the new blog post!

A: I have been looking through old notebooks of mine. I plan to use some of the material in there to create new posts, as well as events that are happening in the here and now. So expect some great new posts this spring. Hey, I sound like a drive-in theater marketer, don’t I?

A: And now, on with the show!
Posted by Jennie Brown Hakim at 8:07 PM No comments: