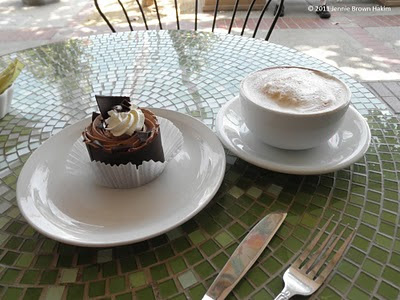 There is a belief prevalent in America and other Western countries that being successful, making money, is somehow wrong for people who are trying to lead a spiritual life. In Buddhism though it is not the money which is in itself wrong; in fact, a person with greater resources can do much more good in the world than one without [italics mine]. The question is how we make the money; whether we understand where it comes from and how to make it continue to come; and whether we keep a healthy attitude about the money.

- from The Diamond Cutter by Geshe Michael Roach
Posted by Jennie Brown Hakim at 8:38 PM No comments:

Read it for the words 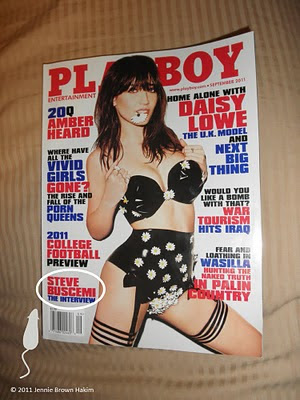 Here is the September 2011 issue of Playboy. It is not a magazine I pick up often (at least, not in its current form – more on that later). Why did I buy it now? (Hint: see what the little gray mouse is looking at.)

There was a time when Playboy didn’t need to interview a favorite actor to get me to read. I have collected issues from the early 1960s to the 1980s – and if any interesting issues cross my path at the right price, I will add them to my collection.

It’s not because I find pictures of naked women all that interesting. Oh, no. I am that creature that most people think is as mythological as the Easter Bunny: the person who reads Playboy for the words.

Those little black things in between the booby pictures aren’t ants.

If you’ve got Playboy in your house and you’re not reading the words, you’re missing out. (The same can’t be said for Juggs. Juggs doesn’t have any words. At least that’s what I think – I’ve never even touched an issue. You tell me!) 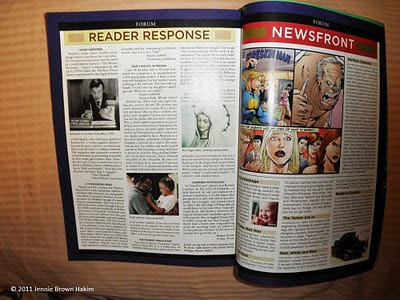 My personal favorite section is the Playboy Forum, which investigates current events in a way you almost never see in major newspapers, much less on TV. This month, I read about why the “War on Drugs” is no palliative against terrorism, and the somewhat-no-definitely-less-than-successful results of Alcoholics Anonymous. (It’s hard to expect much from an organization who urges people to “Keep It Simple, Stupid.”)

However, the September 2011 Forum consisted of just five pages. I can’t say for sure, but in earlier issues (up through the 1990s) I remember it being longer. Did the Forum lose pages to extra Playmate pictures? (A future post will discuss where the gravitas went in commercial magazines – did it get brushed away, like the “yellow,” with Pepsodent?)

Oh, well, back to the past!

I can’t wait to have my old Playboy collection nearby again. I need to read decades-old but timeless debates about censorship and prudery and homosexuality and drugs and the perpetual battle between the individual and the state. I need food for my mind, and not just my eyes – witness the rainbow of clothes and shoes and jewelry and makeup that today’s women’s magazines throw at us.

(I need to end this post. It’s Saturday!)
Posted by Jennie Brown Hakim at 2:11 PM No comments: 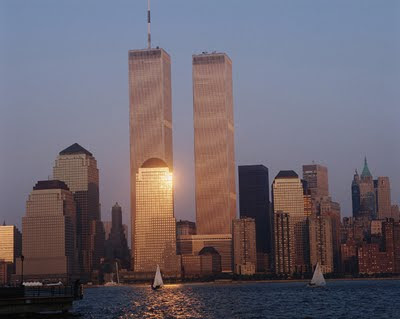 On the morning of September 11, 2001, I woke up – reluctantly, as usual on weekdays – at 6:25 in the morning. My alarm clock awakened me with KROQ-FM, which at that time was the one saving grace of the morning, for that was the time for Kevin and Bean and their motley crew. The first thing I heard was a commercial for the Latin Grammy Awards, which were to air that evening, and I wondered why the Grammys needed a separate Latin ceremony.

After the commercial aired, Ralph Garman, the KROQ entertainment reporter, spoke in a tone unusually serious. He told us about a plane crashing into the World Trade Center in New York.

I went to the bathroom and washed my face quickly during the commercial break, imagining a small Cessna-type plane crashing into the pavement between the Twin Towers.

When I was done washing my face, Ralph told us that two planes had crashed into the Trade Center. At that moment, radio had become inadequate. I went to the living room and turned on the television.

On every channel that mattered, I saw the Twin Towers on fire. No Cessna could do that much damage. The planes were commercial jets, jets carrying tens of people.

And then, something was happening at the Pentagon. Another plane – or maybe it was a helicopter? – had crashed right into the hub of America’s military.

At that moment, I felt the icy grip of pure fear that hadn’t been experienced in America since the Cuban Missile Crisis. 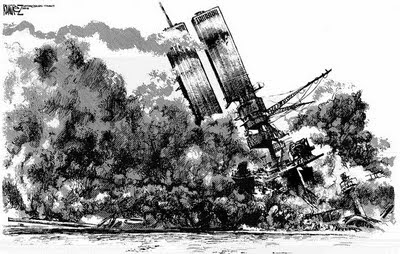 What was going to happen next?

Was this just the advance guard of a fleet of planes traveling across the oceans, carrying bombs that would destroy everything that was precious to us?

Was this the end?

I was alone. I had no friends nearby. I had to be with people.

All I could do was drive to my job as I normally would have.

The Twin Towers disappeared from the Manhattan landscape during my commute. I was stunned and nearly silent for the rest of the day. Almost everyone else was, except for those whose job it was to speak.

I was too scared to cry. Too worried to grieve.

For the next days, I flinched when birds zipped through the plane-free sky. I left the TV on all the hours I was at home, something I never did otherwise. Comforting imaginings of golden-haired angels holding large white eggs for me to sleep in were now impossible. And, for the one and only time, I found comfort in the words of President George W. Bush.

In Orange County, far, far away from the rising ashes, everything looked normal. The late-summer sky still shone brightly on us all. But whatever was normal had left us forever.

On the Internet, other people expressed themselves in myriad ways, ranging from syrupy sentiment to targeted rage. I saved some pictures from that time which illustrate this point: 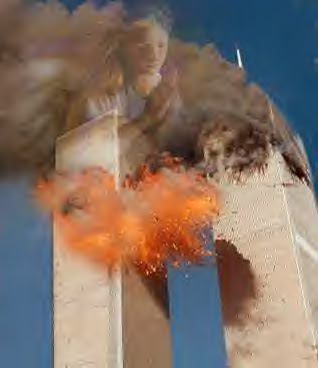 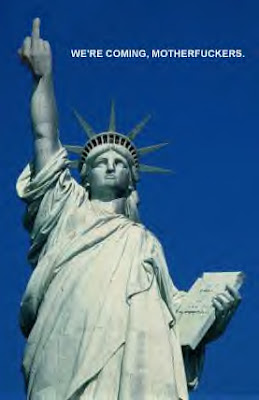 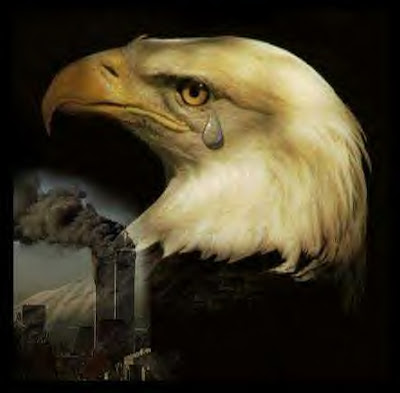 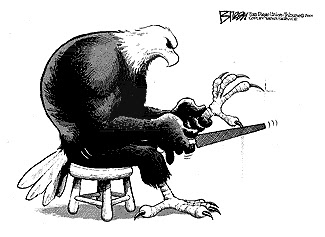 The slim golden lining was my hope that this would purge inanity, bickering, and partisanship from America. The détente between Democrats and Republicans, liberals and conservatives, was a sight to behold.

Ten years later, we are more divided than ever before, more angry, more willing to express that anger. If America was adolescent before 9/11, we have now regressed back to kindergarten (“You stink!” “No, you stink!”). In too many areas of life, whining and blaming others brings not scorn but more attention.

Where did we go wrong?

Do three thousand more people – or more – have to die to bring the American people back to peace? I hate to say this, but I think not even that will be enough.

I want to write that America is a great place. Compared to too many other nations, it is. But the days after 9/11 showed me a glimpse of a better America, a kinder and more understanding America.

I hope we will get back to that place – without another tragedy.