What does the word “oldies” mean now? 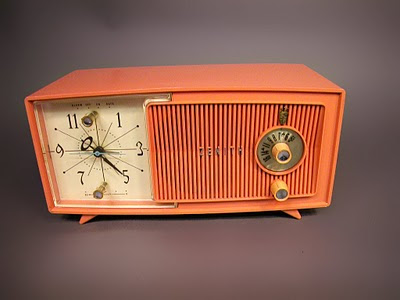 If you’re lucky, you will go through it. But you probably won’t like it.

I’m talking about that not-so-magic moment when you hear a song from your high school days…on the oldies station.

For me, it was even worse. I was listening to K-EARTH 101, the premier oldies station in Los Angeles, and “Fresh” by Kool and the Gang came on. I was in college the year it came out (1985).

Suddenly, I felt that much…older.

If you listen to K-EARTH, or any other oldies station, you’ll find that it’s now full of 1970s and 1980s songs. When I was in high school, “oldies” meant the 1950s and 1960s, sometimes reaching up to the early 1970s. I was way into 1960s music back then, far more than what was currently on the radio, and in addition to listening to K-EARTH and KRLA 1110 AM, I bought oldies 45s from a small record store on Venice Boulevard, not far from my high school. I still have most of those 45s somewhere.

What joy I heard in “Summertime” by Billy Stewart, “Groovin’” by the Rascals, “Let’s Live for Today” by the Grass Roots, “Friday on my Mind” by the Easybeats, “Come on Down to My Boat” by Every Mother’s Son, “Laugh Laugh” by the Beau Brummels, “Winchester Cathedral” by the New Vaudeville Band, and so many other songs that you don’t hear on the radio anymore, even oldies stations, unless you subscribe to Sirius XM.

The line that divides oldies from “today’s music” moves slowly, but it moves. Back in the 1960s, “oldies” meant songs from the 1930s and 1940s. Where does one go when the oldies are the songs you once tried to escape from with older songs?

To talk, that’s where. (The good kind – the kind you’ll find on NPR, Pacifica, and progressive radio stations. The opposite of “progressive” is “regressive”. Think about it.)

Now I’m as eager a collector of radio podcasts as I used to be of 45s. Rarely does a day go by without listening to talk in my car, on my computer, and even through the radio sometimes. I have all but stopped listening to the songs I loved.

Maybe that is why I feel so dull and dry inside too often.

What does the word “oldies” mean, anyway? If songs make you feel young and happy…are they really that old?

If songs can make me feel excited and fresh again…why aren’t I listening to them?
Posted by Jennie Brown Hakim at 4:30 PM No comments:

Farewell to the “last star” 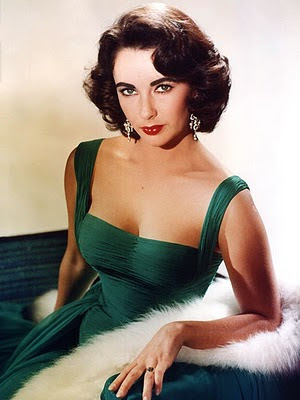 When I woke up this morning, I looked over Two Dogs’s shoulder and saw the television on. Two Dogs had woken up early and turned it on, but had come back to bed. I listened, and the commentators were speaking about Elizabeth Taylor.

I froze in shock. There is only one reason why news commentators talk about old-time movie stars at the top of the hour. I listened and watched the screen even though it was blurry through my astigmatic eyes. I didn’t want to put on my glasses and read the words on the screen. I knew what those words would be.

Even hours later, it is still hard to believe. I am not ready to live in a world without Elizabeth Taylor. Even though she was seventy-nine, an age which is near the average American lifespan – and more years than she may have expected given her epic struggles with health – this is more than the death of a movie star. It is the breakage of one of the last strong threads between now and Hollywood’s Golden Age.

Ms. Taylor was a role model for me growing up, even though I had missed her heyday of the 1950s and 1960s. Reading her biographies took me away from my surroundings of unpopularity and financial struggle and into a world of glamour, beauty, fantastic wealth, and never having to worry about finding love. Back then, I thought it was fabulous to have been married so many times.

Now, multiple marriages don’t sound so “cool” to me (especially when there’s no loving spouse to be there at the end). Ms. Taylor’s life was filled with physical suffering, weight problems, addictions, and furious public disapproval as well as diamonds, gowns, and worldwide fame. Perhaps the modest joys are the best ones.

I have seen a few of Ms. Taylor’s films, some not too long ago – The Sandpiper, The VIPs, Who’s Afraid of Virginia Woolf? No doubt, I will be renting more from Netflix soon – perhaps I’ll even muster the courage to take on the four-hour-plus Cleopatra. 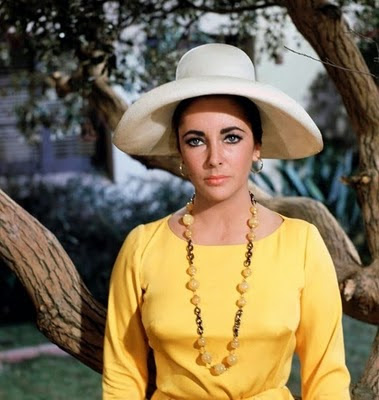 Take some time to think about what Elizabeth Taylor means to you – and remember a time when even great scandal didn’t eclipse great beauty and mystique. (You never opened a fan magazine and saw a photo of Ms. Taylor going to the supermarket!)
Posted by Jennie Brown Hakim at 4:05 PM No comments:

Farewell to a good friend (part 2)

When I went to the Tustin Borders last month, it had still not started its liquidation process, and thus still looked neat inside. When I went to the Orange Borders (at the Block), those dreaded “Everything Must Go” signs were already in the window – and I should have known what that meant. 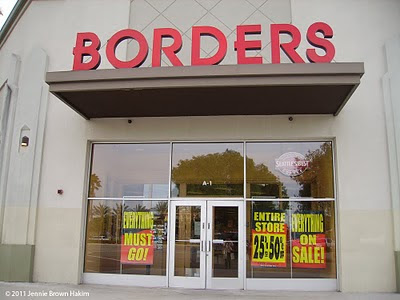 The store was all but gutted inside. Whole shelves were denuded of books, the magazine section had nothing left but the ones people don’t want (including Grit – it’s been decades since I’ve seen an issue of Grit), and the once-charming Paperchase section felt more like an abandoned ghetto. 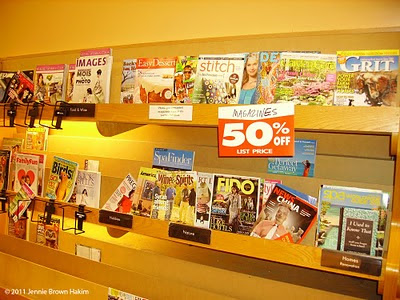 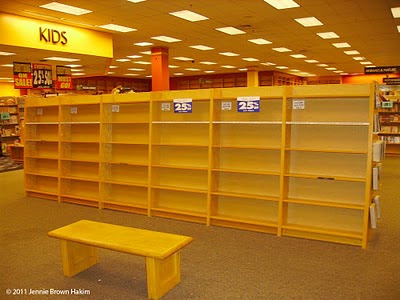 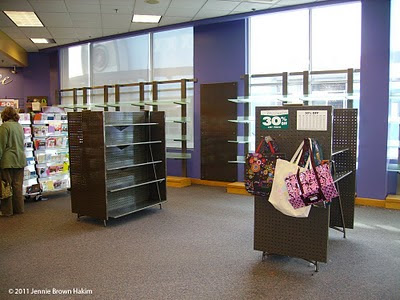 I remember watching with eager eyes as this store rose from the ashes of the old City Shopping Center. I passed by it to and from work, hoping that the store would open soon so I would have a more convenient book-buying experience. And once the store opened, it was great to stop after work, especially when it was after nine p.m. and I wanted to reward myself after a hard day. (Books or not, I never want to commute after 9 p.m. again.) The Block had other places to enjoy, such as the now-closed Hilo Hattie, the now-closed Virgin Megastore, the AMC movie theater, Café Tu Tu Tango, and Koji’s Shabu Shabu restaurant. But it was the Borders which kept me coming.

It was a downer of a shopping experience. I did not find what I was looking for, most notably the March/April 2011 issue of Writer’s Digest, which had some important freelance information. The one thing I might have purchased was this exercise video, “The Flat Belly Workout”: 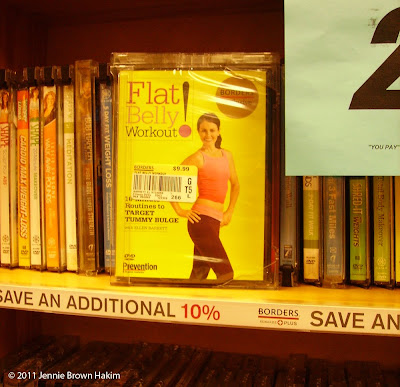 Now, Barnes & Noble is not having stores liquidated. It is still a functioning bookstore, and coming there after leaving the Borders was like seeing the difference between the Getty Museum and the average Greyhound station. If you don’t believe me, go into the closest B&N. Especially if you live in Glendale. The three-story B&N at The Americana at Brand is a book palace, worth saving to shop in.

I used to think that it was a poor marketing practice for B&N to charge $25 per year for its rewards card, while the one for Borders was free. Now I think this is just another case of “you get what you pay for.”

I can still shop at Borders – the one at South Coast Plaza is now the nearest one to me, and I can always go online as well. But without the stores in Orange and Tustin, it will no longer be as convenient.

P.S. I went back to the Orange Borders when I had money to pay for the “Flat Belly Workout,” and it was gone. It bothered me more than it should have. I did want to buy one last thing here, but I could not think of anything else I wanted here, and the store was even more empty than it was the last time. So I walked out of the doors, most likely for the very last time. 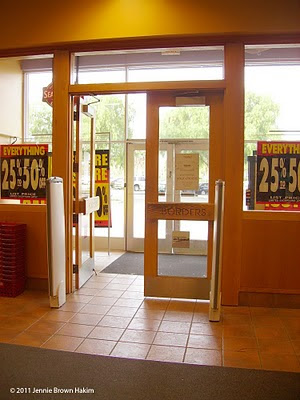 I think of the old saying, “Don’t cry because it’s over; smile because it happened.” I am fortunate to have had the opportunity to buy so many great books at these two stores, even as I know that because of my Amazon Kindle (and the iPad I plan to get), my book-buying habits are going to be different from now on. I see myself buying more e-books and less physical books, even in functioning B&Ns. My bookshelves will be full of old favorites and books that don’t translate well in e-form (such as art books), while everything else hides in my e-readers.

Books will always be with us, just as music will. It’s only how we connect with books that will change. And that’s OK.
Posted by Jennie Brown Hakim at 8:53 PM 1 comment: