...hello, February. The second full month of winter. The shortest month of the year! Just four weeks, this year stacked on top of each other like pancakes.

I like February. I like it because it's short, and just one month behind spring. It's when you start seeing spring catalogs and fashion, so it helps pull your mind forward in time. (Can you guess my least favorite season?)
Posted by Jennie Brown Hakim at 9:15 PM 3 comments:

In July 1986, I had a frightening flight from Phoenix to Los Angeles. Monsoon clouds loomed over Sky Harbor Airport, abruptly ending a normally sunny Phoenix weekend like grouchy day-care workers putting an end to recess. The flight was delayed for more than a hour, giving me extra time to sit in my bubbling anxiety pot. When the plane took off, it flew over the storm clouds, with a too-close-for-comfort view of the lightning. Just before we landed in Los Angeles, a jolt of turbulence rocked the ship, making me scream and cry, “Help!” (But who could help, anyway?) When I came come and saw my white satin moon with its orange star hanging from the bedroom ceiling, I was so grateful to be able to see it again, and promised myself that I would never fly again.

Yes, I heard that airplane travel was statistically less dangerous than car or train travel. But that news only reached the logical part of my brain. My emotional side said it did not want to be 30,000 feet in the air when trouble occurred – I wanted to see the ground when I moved around, so I’d know where to jump in case trouble occurred. If I didn’t feel safe, facts didn’t matter.

Twenty-two-and-a-half years later, my fiancé Two Dogs* and I were driving to Las Vegas. We received a call from his sister-in-law in Oregon. We hardly ever heard from his brother and sister-in-law, so we got off at the first exit we saw and parked at a convenience store. Two Dogs’s brother, an Oregon state trooper, had been killed by a homemade bomb at a bank that day.

We would both be going to Oregon for the services. We would both be taking an airplane. In the winter. And my beliefs about airplane travel had not changed since that flight from Phoenix.

I kept my anxiety to myself, not wanting to be the asshole who complained about things that really didn’t matter much in this situation -- especially since Two Dogs’s sister-in-law was paying for our flight and our hotel from the police fund. I couldn’t let Two Dogs face this without his Mouse.

It would have been nice to take a fear-of-flying course, but I only had two days to prepare. I researched online and used this self-help program: http://www.anxieties.com/flying.php I copied it onto Word and printed it out to take with me. It was helpful – a little. It was comforting to know that each plane in the sky has its own “private highway” that’s ten miles wide.

Reading and doing, as you should know, are two different animals. When we got into the Boeing 737, it felt small and cramped, perhaps because it had six seats in each row with an aisle barely wide enough for a refreshment cart in between. Back in 1986, it must have been only four seats in a row.

The airplane parted from the corridor connecting it to the airport. We rolled down towards the runway, the pavement wet with a California winter’s rain. I imagined men of logic (Mr. Spock, Data, Christopher Hitchens) telling me that I had nothing to fear.

And then – up, up and away, the plane lifting off at an angle not horizontal enough for comfort. I gripped Two Dogs’s hand. Two Dogs had told me that a liftoff was a “piece of cake”, but this piece of cake was filled with holes of insecurity and not-safeness.

Once the plane was in cruising altitude, and as horizontal as it could be in flight, I was able to think. But not relax. I ate my snack (a yummy bag of cinnamon-coated pretzels). I had a diet soda, and one glass of white wine, which did nothing to calm me down. I tried to read, but couldn’t concentrate. The sound of the engines was much louder than anyone who only saw plane travel on TV commercials and movies would think. It was an unpleasant reminder that we were way up in the air, and it took a hell of a lot of energy to keep us there.

I am not sure when or if I will be flying again. Maybe my feelings about it have shifted sideways – I am not so much afraid of flying; I just don’t like it all that much. The noise, the crowding, the sense of helplessness, the knowledge that you are thirty times higher in the air than most skyscrapers…no…I do not like it.

Where we live now, we can see planes on the descent to John Wayne Airport every few minutes. I know that on each plane, there is at least one anxious person, a person just like I was last month. As the plane passes me overhead, I send safety wishes to it, hoping it will land and the anxious person or people will feel a rush of cheer. It’s worked so far! 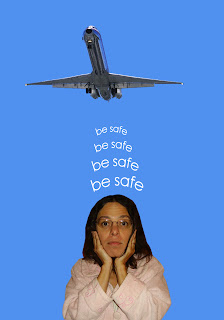 Why I Love the Original NBC Peacock

It hasn't been too long ago since I got Internet access back at home again -- back in a place where I can hear it as well as see it. One of the sites I have rediscovered is YouTube. Some of what is on YouTube is truly a waste of time -- but not the old stuff.

The "old stuff" is clips from cartoons, commercials, and miscellaneous TV from the past. I was thrilled to see and hear the opening themes to "Prince Planet" and "Around the World in Eighty Days" -- themes I have not heard in decades.

Another old friend who comes back to life for me on YouTube is the NBC Peacock. The original NBC Peacock, the one with eleven feathers. Remember this guy?

The original NBC Peacock was the product of designer John J. Graham, who also came up with the three NBC chimes (doo-Doo-doo). NBC was the first of the three major networks to broadcast in color, starting in 1956. At first Graham thought that the butterfly was the best metaphor for color, but his Candella suggested a bolder, prouder creature -- the peacock. (Read more about the origin of the peacock here: http://www.big13.net/NBC%20Peacock/NBCPeacock1.htm)

Graham's Peacock is simplifed from the original -- but not too much so. He has eleven feathers, each capped with a teardrop shape of a maximum-contrast color. The feathers have symmetry, a quality I admire and use in my own artwork. Green/purple, blue/orange, red/yellow, purple/green, orange/blue on both sides, with a singular yellow/purple feather standing tall in the center.

Note the triangular crown on top of the head and the legs and secondary tail at the bottom. You can just imagine this Peacock strutting his stuff, looking haughtily down at ABC and CBS, their color programming still years away. The Peacock is a product of his times -- 1950s art meant abstraction, geometry, and bold color -- but he is also a thing of beauty forever.

Now take a look at the current NBC Peacock:

Only six feathers? No crown? No feet? This guy looks like he's ready to be a couch potato -- a dumbed-down Peacock for a dumbed-down generation.

It's time for us to run from dumbing down. It's time to be more complex -- and unfurl!

Today is the beginning of this new blog called Meandering Mouse. I will write and post photos and graphics of my adventures, thoughts, opinions, and life experience. I will follow the first rule of blogging – give something of value to the reader. When you look inside yourself too much, you suck yourself right out of existence.

On this day when, at last, we have a SMART President in the White House, I am feeling cheerful and optimistic. I didn’t get to watch the inauguration and speech live because I had a doctor’s appointment this morning. My doctor doesn’t have a TV - no, make that television -

(I believe in calling things as they are, because too much abbreviation is dumbing down - when Washington Mutual started calling itself "WaMu", it sounded too much like Shamu)

in his waiting room, but his nurses were listening to it online (unfortunately, I couldn’t hear it in the exam room). In the diagnostic clinic where I had my blood work done, the much larger waiting room did have a television, but it was tuned to this medical education channel. I was skeeved. Medical education tomorrow, history today.

Fortunately, today’s technology has captured the speech and will hold it for me until I am ready for it. Technology is wonderful. If you don’t think so, consider that one hundred years ago, we had to wash our clothes by hand in giant tubs of scalding water. Now we can sit and read a book while the Maytag (Kenmore, Whirlpool, et al) does the hard work. Think about it for a moment. Aren't you smiling now?

More to come...time to meander!
Posted by Jennie Brown Hakim at 7:06 PM No comments: