Meandering Mouse to the rescue, in dreams and in life

Last night, I dreamt that I went into the ladies’ room and entered a stall. For some reason, I wasn’t wearing my glasses. I put them on and saw something shocking in the bowl – several small white kittens and a whole bunch of mice of varying colors in the water.

I kneeled down, reached into the water, and brought out every animal I saw. Miraculously, all were breathing and still alive. When I had all the mice and kittens on the tiled floor, I didn’t know what to do next. I didn’t want to leave them alone, because whoever had put them in the toilet in the first place might come back and do it again.

That’s where the dream ended.

Often, when a dream ends in uncertainty, I imagine a happy ending. I hope that the dream me found a container to take the mice and kittens out of the bathroom and to a safe place.

Fast forward a few hours later, when Two Dogs and I went to a local park so he could participate in a weekly musical get-together.

One of the guys was holding a black-and-white kitten, approximately six weeks old. It took me some time to realize that it was dirty, its eyes sticky with the infection that neglected cats get. It was a sad-looking creature.

I knew that if I did not do anything to help this kitten, I would regret it all my days.

I called 411 to get the number of Animal Control. They told me that I needed a box for the kitten to stay in. I sacrificed a cardboard box from my trunk that was holding a small blue pillow, an extra jacket, and a white Frisbee.

But as I was putting the black-and-white kitten in the box, I saw other people feeding and giving water to other stray kittens and cats. Striped, gray, calico. Most with sticky eyes, some of them skinny. 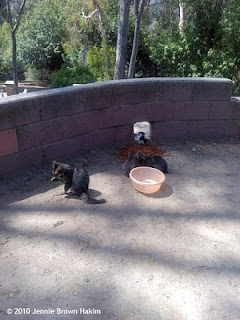 This was going to be more complicated – especially since none of the cats wanted to stay in my box.

When the guy from Animal Control got to the park, he said he couldn’t take any of the cats because they were feral, and therefore unadoptable. I was personally not sure about that, because a family came by and took one of the kittens home, but I had no basis for argument.

So the cat family is still in the park this evening, taking care of each other. I left my box there, because cats like to climb in and out of boxes.

Is there a lesson in all of this? Maybe.

Perhaps there are ideas of mine that are in an unsafe place and need to be brought up to the light. Perhaps I need to be more courageous in doing what is right.

Perhaps…it was just a strange coincidence.

Sleep well, wild kitties, and watch out for each other...like I will watch out for my ideas!
Posted by Jennie Brown Hakim at 8:56 PM 2 comments: