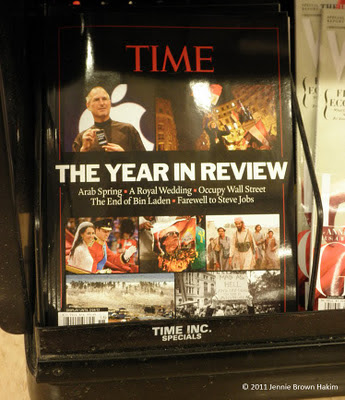 Year-end magazines – they bloom like poinsettias at this time of year. From Time to People, editors feel a need to eulogize the ebbing year – even though the year doesn’t actually end until 11:59:59 p.m. on December 31st (so there’s still time for major news to pop up – it’s like writing a book about a television series before the last episode airs).

These issues used to mean much more to me. When I was 14, I was really excited about the end-of-year issues. I remember buying this issue of the newly revived Life magazine in December 1979 – which was not just the end of a year, but the end of a decade.* 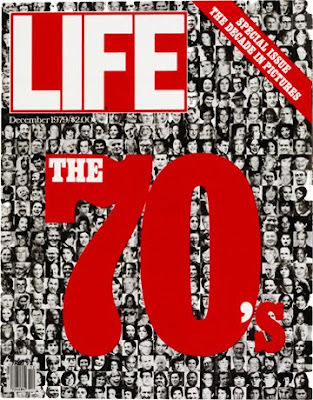 When I was 14, I was just becoming aware of the parade of progress – and it was exciting, like riding a sailboat and feeling the splash of the ocean. I felt that I was a part of history, even if my participation only consisted of buying year-and-decade-end issues.

Thirty-odd years later, however, the parade of progress has lost some luster. It’s not that I don’t care about news anymore. It’s just that I am seeing a truth that doesn’t come to light until you’ve ridden the merry-go-round a certain number of times: the more things change, the more they remain the same.

• Crimes will happen that will shock and disgust us.
• Stories of personal triumph will bring tears to our eyes.
• Famous people will die.
• People not previously famous will become so.
• Celebrity couples will get together, marry, have babies, and break up – and some of those breakups will shock us.
• Politicians will unleash their inner fools (especially in this election year!).
• New words will enter the lexicon (and be so totally out by next year).
• A public figure will say something outrageous and then quickly give a P.R. apology.
• Disasters, natural and man-made, will bring upheaval to thousands of lives.
• A few sports fans will have good reason to cheer – but most will not.

My days of collecting year-end issues are long over (which is a blessing, because the amount of paper already in the Hakim household has passed the “sufficient” category). Now it’s time to keep an eye on my personal parade of progress – to make some history of my own!

* Yes, I know that 1980 was the technical end of the decade – but come on, nobody thinks of it that way. Not even mathematicians.
Posted by Jennie Brown Hakim at 12:00 AM No comments:

What's the true meaning of Christmas? It's the gifts after all

This week, most of us will hear well-meaning newspeople and pundits lecture on the “true meaning of Christmas” – which is as amorphous as a fast-moving cloud. Is it the birth of the man most people know as Jesus Christ? (No one really knows when “Jesus” was born; his birth is celebrated in late December because Christianity needed a celebration to compete with pagan solstice rituals). Is it getting together with family? (That is where many problems start.) Is it a feeling of warm fuzzy goodwill towards all? Maybe.

At the bottom line, though, it’s all about the gifts.

If you don’t believe me, take a look at any given Christmas television special. In the plots of so many of these, the distribution of Christmas gifts (almost always from Santa Claus) is endangered by one threat or another (snowstorm, toy-hating baddies, Santa just being tired of it all) – but lo and behold, at the last minute the gifts come through as they are supposed to in this materialistic nation. 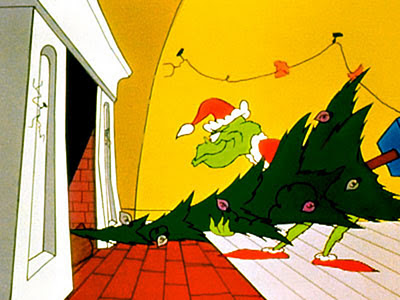 One of the key case studies is The Grinch Who Stole Christmas, a special near and dear to the Hakim household. You know the story – a mean green Grinch tries to “steal” Christmas from the Whos down in Whoville by taking away all of the gifts. However, Christmas comes anyway, personified by a gleaming star that takes the place of the town Christmas tree. 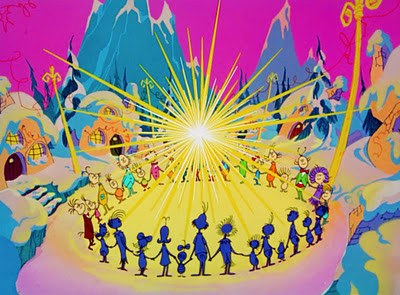 Now, if the true meaning of Christmas was something other than gifts, the special would have ended right there. But, no – the Grinch is so moved that his heart grows three sizes and he brings back the Whos’ gifts – so they get the warm fuzzy goodwill and the material goods. 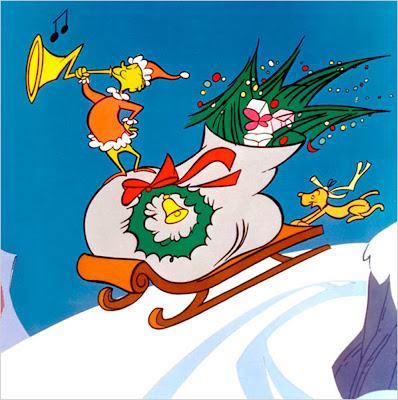 What if the Grinch had not brought back the gifts?

I’ll bet that CBS would have shown this just once, instead of thirty-five times (and counting).

Do you think that Walmart, Target, Sears, Best Buy, Home Goods, Old Navy, ad nauseam would sponsor a Christmas special which celebrated the “true meaning of Christmas” – without gifts? How would they feel if even one-quarter of Americans decided to just give warm fuzzy goodwill this year?

All I can say is, I’d hate to be inside their underwear.

At this point, I don’t put too much stock in the “true meaning of Christmas.” I am content to enjoy the holiday lights and the egg nog ice cream and the gingerbread latte and, yes, the warm fuzzy goodwill.(The crappy songs, such as “Jingle Bells” – not so much.) Hey, it’s a holiday, after all – how much meaning does it really need?

Speaking of holidays, enjoy yours - whatever one you celebrate!
Posted by Jennie Brown Hakim at 12:00 AM No comments: 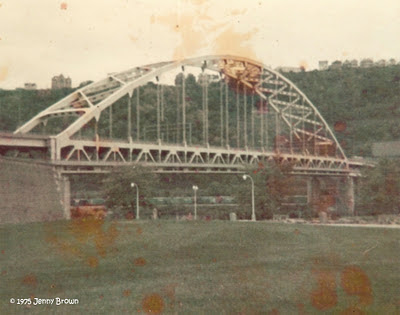 It's only proper that I share the very first photo I took - the Fort Pitt Bridge that crosses the Monongahela River in Pittsburgh. Not bad for a ten-year-old mouse!
Posted by Jennie Brown Hakim at 8:09 PM No comments:

Taking the murder out of mysteries 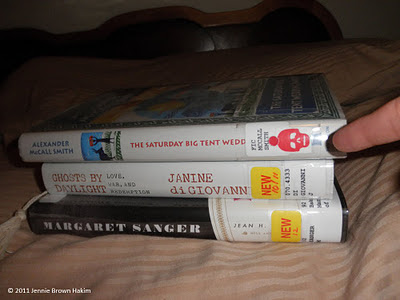 Would Mma Precious Ramotswe approve of this vicious red skull? I think not.

See this stack of library books that I recently checked out? See the scary-looking red skull at the bottom of the book I’m pointing at? That is how the city of Orange’s libraries label books in the mystery genre – including mysteries that contain no murder whatsoever, e.g., the works of Alexander McCall Smith.

That little red skull got me thinking: is the link between murder and the adult mystery genre unbreakable? (Thank goodness it does not show up in mysteries for kids, such as the Encyclopedia Brown series.) Is it moral to use this crime as a form of entertainment?

Despite all of its great reviews, I never read and never will read Alice Sebold’s The Lovely Bones because it’s about a fourteen-year-old girl who gets raped and murdered. That is my deal-killer (no pun intended).

I respect the mystery writers who treat this crime with the gravitas it deserves – even though it is highly unlikely that I would read those books. On the other hand, some folks write books with titles like these:

If you don’t believe these titles, go to your local bookstore or favorite online seller. They’re all real.

Now I understand that we all have different perspectives, but if I knew someone who had been murdered – or had even viewed a murder victim as part of my job – I wouldn’t be laughing. Would anyone publish, or even write, a book called Cream Puff Rape or Pedophilia Boogies with Elvis?

Mysteries are like puzzles, and I do respect puzzle creators. However, why can’t there be more books in which the puzzle is who stole the pepperoni pizza? Or who painted the wrought-iron flamingos black? Or who peed on the chocolate-covered cherries?

That’s entertainment without guilt – and without red skull labels.
Posted by Jennie Brown Hakim at 4:23 PM No comments:

As you could tell by previous posts (here and here), one of my hobbies is collecting old periodicals. Looking at old magazines and marveling how things have changed (sometimes for better, sometimes for worse) is far more fun than watching any reality show. (At least, I think so.)

Some of the best pages are the advertisements. These two, from Reader’s Digest of December 1966 and March 1969, respectively, stood out.

Isn’t it amazing how words change in only a couple of decades?

And here’s a mouthwash with an odd promise in the last sentence: 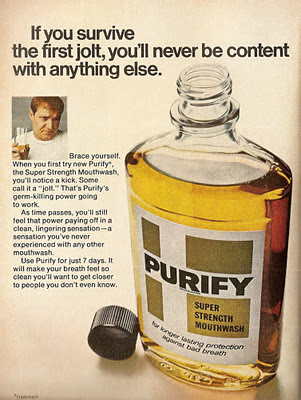 I guess getting “closer to people you don’t even know” wasn’t that much of a bonus – when was the last time you saw Purify at your local supermarket?
Posted by Jennie Brown Hakim at 4:09 PM No comments: