I have been amiss in not hipping you to this site before: WFMU’s 365 Days Project. WFMU is a New Jersey-based radio station that (among other things) searches for weird and wonderful sounds, whether it’s from the record in the back of the bin at the thrift store or a cassette that hid in a shoebox at the bottom of your closet for a generation – and they share them with the world via MP3 files. Yay, WFMU!

I spent one Saturday night searching the 365 Days Project (actually, two of them, in 2003 and 2007). It was a lengthy process searching through each month and day, reading each blurb, and deciding what files I were “keepers.” But it was totally worth it – it was just like looking through the record bin at Goodwill! 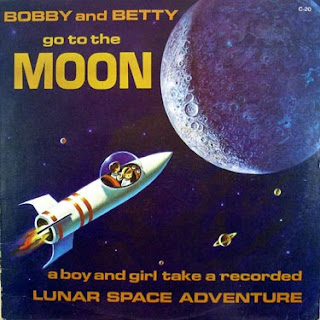 One of the best finds was Bobby and Betty Go To The Moon. I had this record once upon a time. What joy for a Star Trek-loving girl to listen to the adventures of two kids of about the same age traveling to the moon all by themselves in the far-off year of 1985!

Next time stormy weather keeps you indoors, may I suggest spelunking in the 365 Days Project? (Beats Googling Heidi Montag!)
Posted by Jennie Brown Hakim at 8:14 PM No comments:

Bring back that sunny day 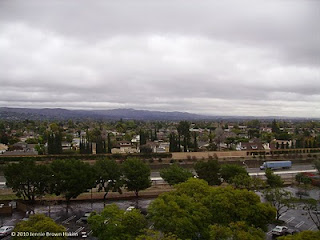 As many of you know, we in SoCal have been patiently suffering under a series of major rainstorms. I write “suffering” because because even though we have been in a drought the past few years, four straight days of rainfall isn’t fun. At least, not for me.

I am grateful that the apartment we live in has a solid ceiling and windows that are watertight when closed. I have lived in places with leaky ceilings and windows, and it’s just terrible when your shelter doesn’t shelter. I am grateful for my umbrella, warm clothes, and space heater for the bathroom. I am grateful that I didn’t have to drive too far this week and that there were dry patches that allowed me to go to the laundromat and grocery store. As always, I am grateful that Two Dogs is here with morning tea and cozy dinners and cuddles at any time.

Still, the lack of sunlight does turn this mouse’s fur blue. When it rains, it takes away favorite activities like walking, driving to places that make me happy, and visiting friends in person. The gray sky is dull, and the dull echoes back within me. I feel inhibited and reduced. 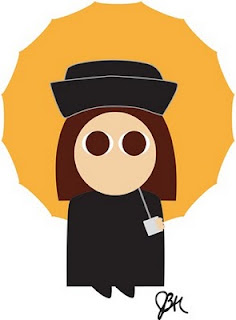 The good news is that we should be getting a break this weekend. I can’t wait. I hope the ground gets a chance to dry out, and I can take at least one good walk. I also hope that we’ll see some extra blooms this spring. (Two more months until the vernal equinox! I’m glad February is a short month!)
Posted by Jennie Brown Hakim at 8:11 PM No comments:

Something else to worry about (if you choose to)

Quick, name one thing that the mass media is good at.

If I knew how to add sound effects to this blog, you’d hear three loud game-show buzzers after all of the above – the kind of buzzer that says loud and clear, “HELL, NO!”

What is the mass media good at? Giving us more and more things to worry about. Now it’s your “online profile” and how it looks to potential employers.

Beware the photo of you drinking margaritas with your friends in Cozumel back in the summer of ’06! Beware the pointed comment you left on a political website! Beware your own blog, because you might have written something that other people may not like! Beware being modest and having five or less Google hits to your name! Beware people who tell lies about you on Facebook!

Now, sayeth the mass media, you need to Google yourself every day and pay companies to “clean up” your Web profile, or else you run the risk of being unemployable.

I say the hell with all that.

If a potential employer cares more about the content of my blog than the quality of my work, that’s an employer I want nothing to do with. What is the point of having a blog if you’re going to censor yourself?

If a potential employer is offended that I’m an atheist (4-12-09), that I don’t volunteer (8-31-09), that I emphasize with the Misfit Doll (12-22-09), or that I even mentioned Bill Ayers (12-3-09), I can’t care too much about that. My blog first and foremost is a place to speak my mind. Not a place to “promote” myself or sell things. (Ever notice that blogs whose primary purpose is to sell things are often as boring as beige?)

I have work to do and meanders to walk and pages to write and books to read and baths to take and Two Dogs to love. Not a lot of room in my life to go cleaning up my web profile or jumping on any worry trains. I say turn off the TV (and the computer, even though I know it's hard) every now and then and see what is right in front of you.
Posted by Jennie Brown Hakim at 9:40 AM No comments:

The most difficult month of the year? 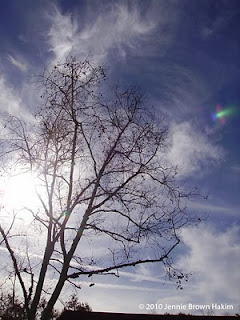 January, in my opinion, is the most difficult month of the year. It starts off nicely with New Year’s Day and the Tournament of Roses Parade (and a smattering of bowl games, if you’re into that). After that, though, January is one tough group of thirty-one days to endure.

Its other major holiday, Martin Luther King Jr. Day, is not exactly one of fun and frolic. The worst of winter usually crashes down on us in January; even in temperate climates such as California, gray and rainy days are more likely. You have to wait patiently for Valentine’s Day (unless you’re a retail store). Catalogs mock you with their spring fashion issues. In other words, you want to go to bed and not wake up until February 1.

Well, January doesn’t have to be that bad if you use your imagination. It’s the start of a new year. Why not let January be the month where you try new things that will make you smile?

1. A new exercise video. Since some of you are using this month to start new health resolutions, why not try a workout that burns boredom as well as calories – such as Hemalayaa's Bollywood fitness series, Zumba Fitness, Soul Sweat Dance, and Nia.
2. New foods. Think about all those old Bon Appetit magazines you’ve saved, or the manila envelope of printed recipes that’s tucked between the cookbooks in your kitchen. Justify your saving those and actually try a new recipe. It’s good to stay home with some good food on a January night.
3. New movies. The films that are most likely to be nominated for Oscars this month will probably still be playing at the cinema. If you aren’t interested or have already caught them during the holidays, amp up your Netflix renting (take full advantage of not having to go out to rent movies!)
4. New books. The trees of January are barren, but the bookstores of January are ripe with new fruit. This Tuesday (January 5), I look forward to buying the new memoir Committed by Elizabeth Gilbert, who wrote the megaseller Eat, Pray, Love. Even a year later, I still consider myself a newlywed, and I think I can learn something from Committed. (FYI, I bought Eat, Pray, Love for fifty cents at a library bookstore, so I owe Ms. Gilbert a new book purchase!)

Fill your January with joy, and it will seem to go by pretty quickly. Oh, and don't stare too long at those leaveless trees!
Posted by Jennie Brown Hakim at 7:31 PM No comments: