And now, a few words about apology

…no, this is not me apologizing for not standing during the national anthem!

I don’t often write about popular news topics on this blog, for two excellent reasons:

1. Popular news tends to be boring and banal and base, and

2. You’re sick of hearing about it, too – that’s why you’re here instead of CNN/MSNBC/Huffington Post/your city newspaper site, isn’t it?

Today, I’m going to make an exception to this rule. I’m not going to wonder if you heard the Tiger Woods apology this morning – most of you have. The fact that an athlete apologizing for marital infidelity is considered a SPECIAL REPORT by CBS, NBC, and ABC – and more important than the man who flew his plane into an IRS building yesterday – says something about America, and it is not good. 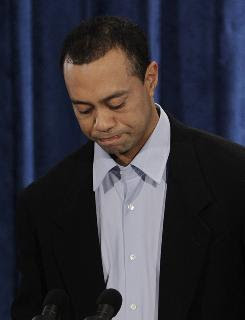 What we saw was a professional golfer standing at a podium, looking like a kid waiting for the principal to see him, reading a pre-written statement that was heavy with the clichés that a flyover state sportswriter might reach for at 2 a.m. – “I have let down my fans,” “I convinced myself that normal rules didn't apply,” “Achievements on the golf course are only part of setting an example. Character and decency are what really count,” and so on.

Is Woods truly sorry? Is this another step in his rehab? Or is this just another one of those BS PR apologies that makes thinking people yawn? I do not know, and it doesn’t matter to me. But it did make me ponder the meaning of apology.

An apology is a gift – not an obligation. Tiger Woods does not owe the press or public an apology. I would go so far as to say that he doesn’t even owe it to his wife – the one person to whom this matters the most. He should apologize only

1. If his remorse is sincere, and

2. If he is going to stop the offending behavior.

Issue #2 is most important. Don’t waste your breath or my time with an apology if you’re going to keep on keepin’ on.

Suppose I was driving down the street, and from out of nowhere a pink paintgun pellet strikes one of my car doors. (This actually happened years ago.) If I had to choose between an apology and the money to repaint the door, I would choose the money. (In real life, I received neither, and the pink stain remained on my car to the day I traded it in.) Words are only words – it is action that counts. Please do what you can to alleviate the wrong.

We the public will not see, and should not see, whether or not Woods will change (unless he errs again in the same spectacular way.) I say let’s all keep an eye on ourselves and our behavior first, not a puffed-up SPECIAL REPORT. (Remember when SPECIAL REPORTS were actually special and announced events of world-shaking importance? But that’s another post for another day.)
Posted by Jennie Brown Hakim at 11:54 AM No comments:

Sit down for freedom

One of the gutsiest blogs I have read is Penelope Trunk’s Brazen Careerist. In between the practical, career-oriented posts are Ms. Trunk’s startling POVs about big-picture topics. How could you not look twice when the blogger Tweeted about her own miscarriage?

In her Martin Luther King Day post (1-18-2010), Ms. Trunk wrote about going to a rodeo in Madison, Wisconsin with her children and male companion (labeled “the farmer”). Ms. Trunk isn’t fond of the spectacle of animals risking injury for mere entertainment’s sake, and neither am I, but that’s a rant for another day. The sentence in the post which got my attention is as follows:

I really hated it before there were any animals. Before there were animals there was the flag, rising above the dirt ring, and the announcer saying everyone should sing the Star Spangled Banner to honor “the flag that protects our troops, and our churches and our great country.”

I looked over at the farmer for churches, and before I could roll my eyes, the announcer said, “Everyone please rise in the name of Jesus and sing the Star Spangled Banner.”

I told my kids to stay seated.

What was with “rise in the name of Jesus”? What is the connection between our national anthem and a rabbi who died more than 1700 years before the United States came into being? How can the American flag – a rectangle of cloth – protect a soldier or a church or anything from a bomb?

Why is the "Star-Spangled Banner" invariably played before sporting events in this country? The last time I stood for the national anthem was the last time I attended an Anaheim Ducks game, back in October 2005. I don’t recall ever feeling a swell of patriotism; I instead concentrated on staring down at the players before they covered their handsome heads with their helmets. I stood solely because of habit. It didn’t occur to me not to stand, even though these were the days when Bush and Cheney allowed some not-very-American happenings to go down in tiny cells around the world.

I now think that habit is the excuse that timidity gives itself.

Try this – the next time you go to a sporting event, do not stand for the national anthem. This has nothing to do with your personal feelings about the nation, the flag, and/or the troops. This is an exercise in doing something difficult. An exercise in not following the crowd. An exercise which might be practice for telling someone some tough words, or for making a decision that is right but unpopular. An exercise which is a true expression of what America means.

Most people are going to stare at you. Some might stare at you as if you just mutated into an open bag of fresh manure. It is possible that someone will dump his cup of beer on you – or worse. That is their problem, not yours. Sitting while the national anthem is being played is NOT illegal. Assault (which includes beer-dumping) is.

Sitting down for the anthem may feel strange. But so does asking a client who is overdue with his payments to send you a check immediately. Or telling your 80-year-old mother that her driving is too dangerous for herself and the other people on the road. Or going public as an atheist.

If you attend a lot of events where the anthem is played, you can make this a new, good habit (like brushing your teeth), every fifth time you hear the anthem, or even every tenth.

After Penelope Trunk’s post, a slew of commenters lined up for the attack – the kinds of people who think America is so fragile that a seated bottom during the national anthem is a grave wound. Actually, America cares just as much as Jesus does (who, as you remember, died about 2000 years ago) whether or not you stand or sit. Think about it.

(And this means that the next time I hear the national anthem played, I will have to stay seated lest I prove myself a rank hypocrite. We shall see when and if this plays out, for I don’t anticipate attending any sporting events in the near or far future.)
Posted by Jennie Brown Hakim at 1:47 PM 2 comments: