The Los Angeles Times Festival of Books is an outstanding springtime ritual. Every April, authors, booksellers, readers (and, sometimes, a Meandering Mouse) come together on the splendid campus of UCLA to celebrate the joy of the written word. We listen to writers discuss their books and craft, buy out-of-the-way books from rare and independent booksellers that we would never have found otherwise, eat iced lemonade at the top of Janss Steps…

It seems an earwig has crawled into the ear of the LAT which is telling it wrong things.

The Festival of Books will not take place at UCLA this year. Instead, it’s going to be at…wait for it, I’m trying to write this without headbutting the keyboard…USC. (At least there’s no earwig telling me wrong things, because I’ve resisted the temptation to forget the caps shift and type “usc”.)

According to the “official” explanation, “The move allows for increased attendance due to USC's central location, proximity to public transportation, abundant parking and newly enhanced campus facilities.” 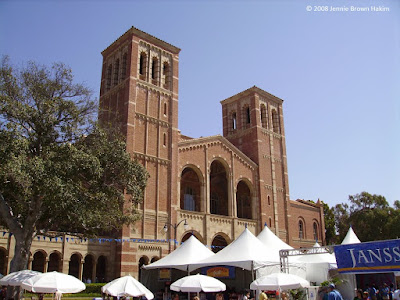 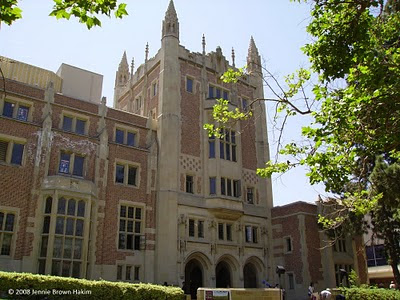 Can USC offer the experience of climbing towards the sky via Janss Steps? 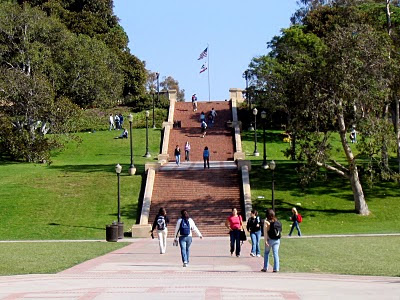 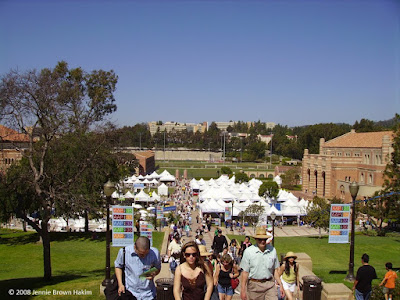 How about these benches, perfect for sitting a spell and browsing through your purchases? 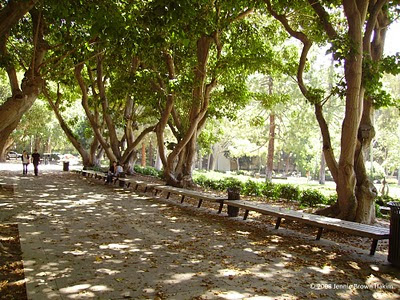 Or going into the Franklin D. Murphy Sculpture Garden and looking up, way up, at Gaston LaChaise’s “Standing Woman”? 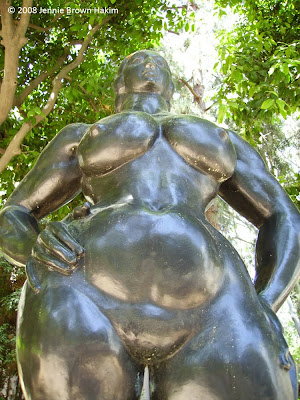 And Deborah Butterfield's "Pensive" horse has far more character than that Trojan horse: 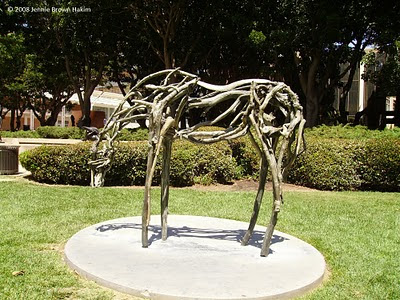 I had been thinking about going back to the FoB this year. (The last time I went was in 2008.) But now…it’s not looking like a good idea. (As if Two Dogs would even let me go to downtown L.A. by myself.)

I’m bummed. I feel that something special has been taken away from me, and there’s no place to shout at about it…except this blog. Of course, why can’t I visit the UCLA campus without the lure of the FoB? (It still has an excellent student bookstore.) Beats spending one bitty penny at u…um, USC.

Good luck with this year’s FoB, LAT. Remember, if this USC experiment doesn’t work out, you still have a home in Westwood. 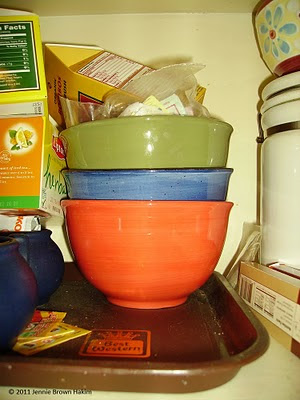 These are the bowls my husband and I use for soup, ramen, and stews. They are all the same size, but different colors. Because there’s only two of us in the household, these four bowls rarely get used all at the same time. Often, we use only one because my husband sometimes skips lunch and/or dinner.

Here’s what happens when it’s time to put a bowl back on the shelf: 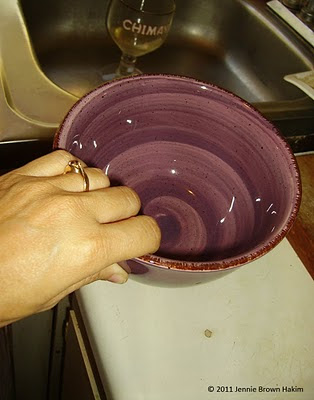 1. I pick up the bowl that has been used, washed, and dried. 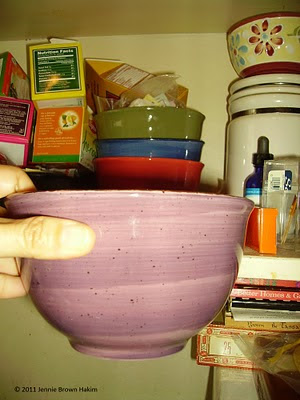 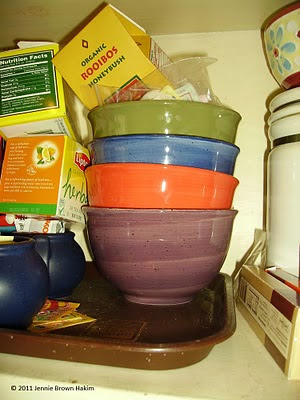 This is what I call respecting the bowls, or being fair.

I’m a person who lives by logic, not superstition. On the surface, the idea of “respecting” inanimate objects seems as silly as believing in ghosts. But that is just the surface.

Cycling the bowls is a logical idea. Each bowl receives equal use, washing, and risk. I won’t end up with one well-used bowl on top and three barely-used bowls below. I bought these four bowls at Ross Dress For Less. Yes, they sell housewares, too, and most of them are of good quality. But the “Ross Rule” still applies: If you see something you like and you can afford it, buy it now, for tomorrow it may not be there. The last time I went to Ross, I found bowls of the same shape as the ones we have now, but not the same colors. So if I break one of these bowls, I may never again find one like it. By cycling the bowls, each bowl has the same chance of being broken. I do the same with plates, glasses, and cups.

I like having a fair cupboard – it is something that I can make fair.
Posted by Jennie Brown Hakim at 6:52 PM 2 comments:

Farewell to a good friend (part 1)

Ever since I was a small child, going to a bookstore was more exciting than going to Disneyland. From the living-room sized, fluorescently lit boxes in suburban malls to the double- and sometimes triple-deck stores of the booming 90s, I have spent many a happy moment meandering around bookstores – even when I couldn’t buy that day.

Borders is one of my favorite bookstores – “one of” standing proudly in a long row of favorite bookstores of all kinds, from chain to independent to used. (I like bookstores that contain books I want to read.) I feel special pride when I have the opportunity to purchase from an independent bookstore like Latitude 33 in Laguna Beach or Small World Books in Venice, CA. However, these two stores are not conveniently close to me. It also helps that Borders has a free discount card (the Barnes and Noble card costs $25 per year) with which one can receive discounts of up to 40% off.

This week, Borders announced its bankruptcy and will close about one-third of its U.S. stores, including two that are close to home – the one in Tustin District (which opened not too long ago, in August 2007) and the one at the Block in Orange (I saw it being built on the way to and from work in 1998).

I feel melancholy about these closings. Even though these are not the only two Borders close to me, I believe I spent more time in these two. I can see a book on my shelves and remember (for the most part) exactly where I bought it. Many of my books came from the shelves of the Tustin and Orange Borders stores.

I also feel guilty. For the past couple of years, I haven’t been buying books at Borders as much as I used to – mostly due to financial reasons, but also because of my Amazon Kindle. These days, when I am able to buy a book, Kindle is my first choice – unless a book has colorful illustrations. (That may change when I get my iPad.)

Recently, I visited the Tustin store with a buy one paperback, get one more at 50% off coupon. As I walked toward the storefront, I expected gigantic red and white signs screaming STORE CLOSING, but they weren’t there (yet). 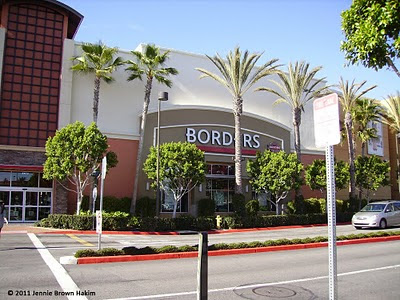 Inside, it looked normal for a weekday afternoon – not that many customers, shelves full of current books and magazines. I looked for the book The Anti-9-to-5 Guide by Michelle Goodman, but it wasn’t there. (A store fails, if only a tiny bit, when it doesn’t have what you want.) I did find Hell’s Angels by Hunter S. Thompson. I have a semi-official rule not to buy new books by deceased authors (because they get no royalties), but I couldn’t find it at the library and it’s not available on the Kindle, either. (I think this is the kind of book that needs to be read on paper in Times Roman font anyways, just like it appeared in 1966.) 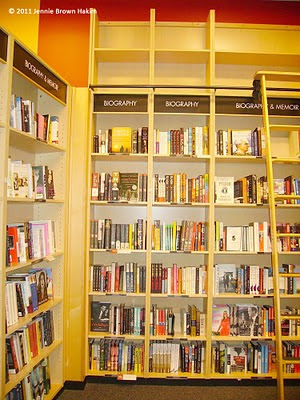 Now for one more paperback to satisfy the coupon requirements. I had a hard time with this. I looked for a useful book, one about the Chicago Style of writing, but the one in the computer was a.) not in the store, b.) not in paperback, and c.) cost $65.00. I looked in a few of my favorite sections, Biography, Self-Help, and Sociology. (Notice the multiple books about food in the Sociology section.) 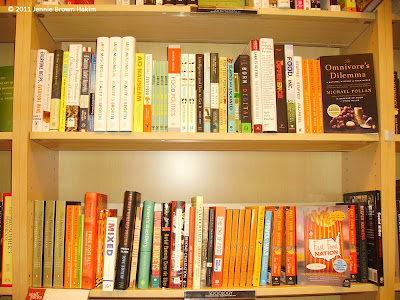 Then I scanned Literature, and was about to take home a small paperback copy of Shakespeare’s Titus Andronicus (which, again, is hard to find in the library – and redundant because we have not one but two complete volumes of Shakespeare, but they’re hidden in our storage space), when I turned into the Spiritual section and found Creating Money by Sanaya Roman and Duane Packer. I remembered this title because SARK had talked about it in a radio interview with “Mary in the Morning”. It was not the kind of book I’d thought I’d find at Borders – but I was grateful for the miracle, as it were. In the next few weeks, I will visit the Borders in Orange and buy something (and take pictures, too). Life goes on, and sometimes things and places you love just aren’t there anymore – you know this, Flex shampoo fans. But somehow, you’ll still find what you essentially need.
Posted by Jennie Brown Hakim at 6:50 PM 2 comments:

Why do we watch the Super Bowl? 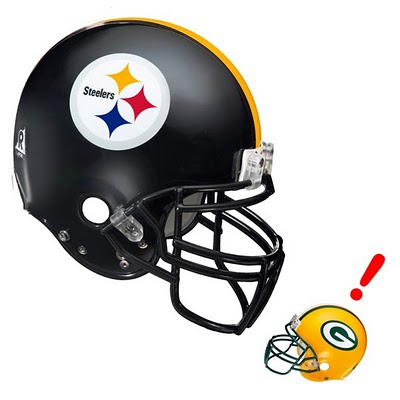 What does the Super Bowl do for us?

1. It gives us a reason to get together with our friends.

2. It gives us a reason to cook and eat nutritionally incorrect food, food that is salty and greasy and fatty and tasty.

3. It gives us commercials to laugh at and talk about later.

4. If you’re a gambling person, it gives you something else to bet on.

5. If you go to work on Monday, it gives you something to talk about with your co-workers.

6. And, of course, it gives us a reason to drink intoxicating beverages.

Of course, any given NHL or NBA game from now until the playoffs can fulfill these same purposes. But it’s the NFL’s final game of the season that makes our “Super” day.

Do we really love watching oversized men knock each other down? Maybe we have loved that since we walked on two legs.

I am hardly a football fan (the above graphic notwithstanding), but I will be watching with Two Dogs and friends. I will probably be eating nutritionally incorrect foods and drinking intoxicating beverages (not too much!).

I will take advantage of this temporary distraction from regular life – life which can be worrisome and stressful and dull – and I will probably talk about it later.

I will most likely forget the details about the game, but not the food and the fellowship and the commercials.

I will probably do it again next year.
Posted by Jennie Brown Hakim at 10:58 AM No comments: