Curb your TV (so you don’t have to kill it) 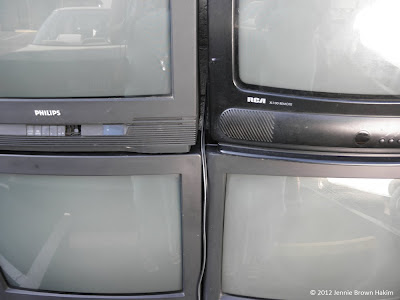 No, it’s not the refrigerator. Or the stove. It’s not even in the kitchen – at least, it shouldn’t be.

Perhaps you forgot it was an appliance.

Television is our bête noire. We blame it for everything we can think of that’s going wrong with our world, from alienation to obesity, from family breakdown to loneliness, from ignorance to inattention - as if none of these existed before television’s exponential growth after World War II. Pundits give verbal whacks to television, and we nod our heads gravely, knowingly.

We still can’t tear our eyes away from it.

Ever since we were small children, when our parents dropped us in front of the tube to keep us quiet (and then dangled it like a carrot for the rest of our childhood), we’ve been hooked.

We turn it on in the morning and keep it on all day, even though we’re not enjoying what we’re watching. (How much pure childhood joy did you get out of watching the Saturday morning cartoons? Did anyone like Scooby-Doo that much?) When it appears in the waiting room or the checkout line or the gas pump, we have to look even though the output at these venues makes Happy Days look like Omnibus. When we’re at our friends’ homes, our heads crane toward the television instead of our friends’ faces.

Television is hypnotic. It’s got powerful juju. It’s the appliance with WOOOOOO.

Think of it like a knife. Or an electric mixer. A knife can slice avocados into thin slices for a salad, or it can deprive you of beloved digits. An electric mixer can turn flour, sugar and eggs into cake batter, or transmogrify your hair into an uncombable mess.

Television is a tool. You use it. It doesn’t use you. (Can’t you feel that WOOOOOO slithering away?)

I can think of three worthwhile things to do with television:

a. Exercise with a workout video.
b. Rent a film from Netflix (or, if you are super-duper-triple lucky, from an offbeat video store in your neighborhood, such as Vidiots on Pico Boulevard in Santa Monica) that is not for the megaplex.
c. Paint a picture of a forest with a trail that wiggles toward the horizon on the glass. (Or a portrait of your pet. Content isn’t relevant here.)

Three is my limit. It should be yours, too.

The television can waste your time. Or it can bless your time. It all depends on how You. Use. It. (In that exact order. Feel your thumb wiggling toward the OFF button on your remote control.)

You don’t need to kill your television. Just train it. 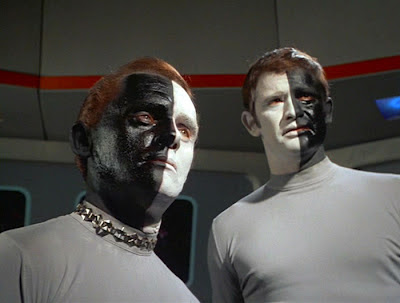 According to the one-drop rule, these fellows in the "Star Trek" episode “Let That Be Your Last Battlefield” are ALL black. Does that make sense to you?

Do you know about the “one-drop rule” – the idea that if a person has even one iota of African ancestry, he or she is considered black – regardless of physical appearance?

Silly, isn’t it? (And why does it not apply when it comes to Hispanic, Asian, or Native American ancestry?) This bad idea started shortly after the end of the Civil War, when the South, now faced with millions of freed slaves, became hysterical with fear that blacks and whites would mate and produce children “tainted” with black blood. Of course, the one-drop rule was law for decades to come.

Today – in a bizarre irony – blacks are far more likely than whites to insist on enforcing the one-drop rule, because if people who are half-black and half-something else were to call themselves biracial (or multiracial, as the case may be), the numbers in the “black” population would go down…which is not a good reason to hang on to this silly rule.

I could say more, but I will let one of my favorite wisdom brokers, Cecil Adams, give you the last word. Cecil is the columnist/researcher behind The Straight Dope, which has entertained and educated Chicago Reader fans (and many others in syndication and the Web) since 1973. Not too long ago, a reader asked Cecil whether or not Ludwig van Beethoven had African ancestry. Here is Cecil’s reply:

Beethoven black? Sure, why not? If we accept the "one-drop rule" that long prevailed in the U.S., namely that any black African ancestry whatsoever makes you black, and if we further buy the argument sometimes heard that everyone on earth is at least 50th cousin to everyone else – that is, has a common ancestor no more than 50 generations back – then everybody's black, or more accurately, as Santana once put it, everybody's everything.

That is the only logical conclusion to the one-drop rule – a conclusion which will please both white supremacists and black-pride activists alike. /sarcasm

Posted by Jennie Brown Hakim at 4:30 PM No comments: 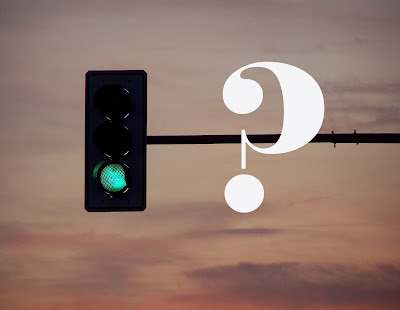 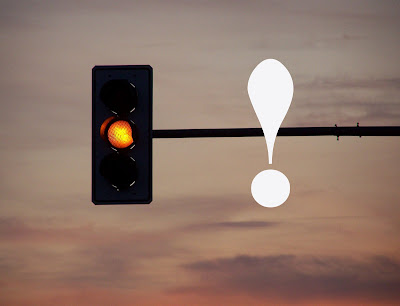 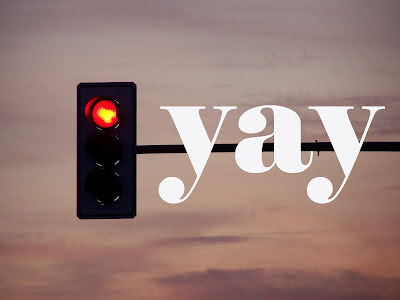 Age is supposed to make you less afraid of life. For me, it is having the opposite effect. It may be because I understand more than ever what one careless error (by me or someone else) will cost. The more I am grateful for life, the harder I hang on to it.

This attitude has blossomed most spectacularly in my attitude towards traffic lights, of all things. Not too long ago, a traffic light was red, yellow, or green, and I had confidence after twenty-two years of driving that I knew what to do no matter what color was above my path.

Now I am far more eager to see red lights than green ones.

Red lights are certainty. They are as unambiguous as a STOP sign – you are supposed to STOP. Not think about whether or not you will stop.

Green lights are uncertainty. It could be green a few seconds more, just enough for you to cross the intersection…or it could jump up to yellow, warning you that STOP time is imminent.

Imagine a green light far away from you on the road. If you are lucky, it will turn yellow and then red before you are in the intersection…or when you are at least in the middle of it.

What lies between is a strip of road in which you ask:

Everyday driving should not be as heart-pounding as a ride on the Thunderbolt (Cyclone, Colossus, Kingda Ka – pick your favorite roller coaster). But the more I drive, the more anxious I get about this. What, besides taking anti-anxiety drugs, should I do about this?

If only the traffic lights would let us know…

Actually, they can. Just not in America.

Posted by Jennie Brown Hakim at 4:13 PM No comments:

That radio interview reminded me of something: I haven't yet told my blog readers about my e-books! 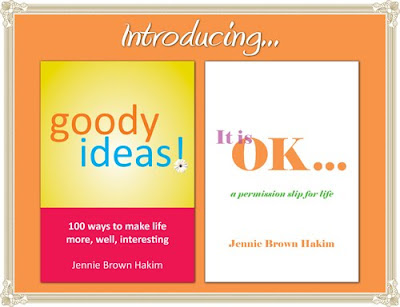 I've tooted the horn on Twitter, Facebook, and LinkedIn - but not here. This is a personal blog, not a business blog, but that's no reason not to write a post about Goody Ideas and It is OK. For less than the average price of a magazine (and with far fewer ads!), these two e-books can be yours.

Here is the text from my press release:

Jennie Brown Hakim appreciates the fact that today’s technology makes it easier for people with ideas to tell the world – right away.

“I have no problem with responsible gatekeepers of media, such as traditional book publishers,” says Ms. Hakim. “But it takes time for a book to get published the ‘normal’ way – more than a year from acceptance to publication date. With e-book technology, a book can get to its audience hours after the final draft is done. How amazing is that?”

Ms. Hakim’s two e-books, Goody Ideas and It is OK, are made for an audience that seeks new ways of thinking. Goody ideas, according to Ms. Hakim, are ideas that are meant to bring nothing but joy. Their end result is fun and happy memories. Most goody ideas have low or even no cost – all you need to bring is imagination.

Some of Ms. Hakim’s goody ideas include making poetry out of collected cookie fortunes, listening to favorite songs at 2 a.m., and having a “Bed-In” like John Lennon and Yoko Ono. Each one of her 100 goody ideas can be done alone as well as with others, so the reader does not have to depend on company to play. “I know how hard it can be to get other people to go along. No matter how many friends you have, they may not always be ready when you are.”

“We receive so many messages about what it is not OK to do,” Ms. Hakim says. “I like the idea of a book which says what is OK to do – and it’s more than you may think.”

Some examples from the book include:

• It is OK, if you’re a gal, if your best friend is a guy (and vice versa).
• It is OK to admit that you don’t have it all figured out – even as an adult.
• It is OK to prefer white rice to brown rice. (The same goes for bread.)

Ms. Hakim also designed both of the book covers using the Adobe Creative Suite. “Book design is another of my creative specialties, and it is a meditation for me. When a book is well-designed, it can’t help but add to the reading experience. Thanks to technology, e-books can be just as beautiful as printed ones.”

Both e-books are now being sold for the Amazon Kindle, the Barnes & Noble Nook, and at Smashwords (which sells books that can be read on almost any e-reader). The links can be found at Ms. Hakim’s site, JennieBrownHakim.com.

These are certainly not the last words from Ms. Hakim, who has written articles for Orange Coast and Vision magazines. “I want to see what reception these two books get, but of course I expect to write more in the near future. I can’t not write, after all.”