Something to look at while you eat your Halloween candy 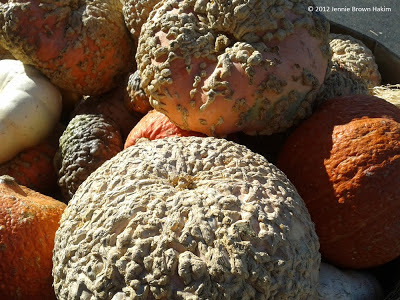 Odd pumpkins are odd.
Posted by Jennie Brown Hakim at 9:26 PM No comments:

Unanswerable questions about "Lost in Space"

After that IMPORTANT prior post, here is a piece of cotton candy for you. Because this blog is like that.

1. Why send one nuclear family to colonize Alpha Centauri? Would it make more sense to send a group of fertile couples? Or at least more than one family? What were the Robinsons supposed to do once they got there? 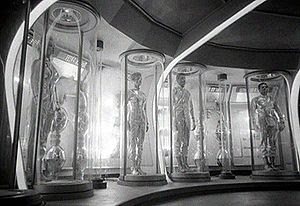 2. Why put them in suspended animation if the trip is going to last only five and a half years?*

3. If this mission is supposed to solve the Earth’s dire population crisis – which affects every nation -- why sabotage it? 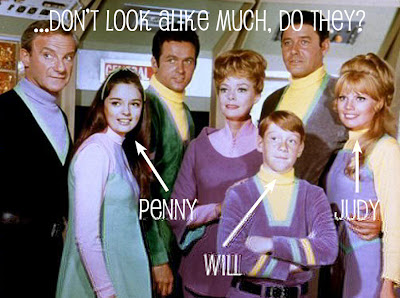 4. Why do Judy, Penny, and Will look nothing alike? (Even in the movie, they don't.)

5. Why do they run into so many unscientific characters – pirates, cowboys, princesses, circuses, etc, etc, ad nauseam?

6. Where did they get their seasonal changes of clothes? Why wear the same clothes every day? (Hey, it wasn't Star Trek, in which they wore uniforms.) 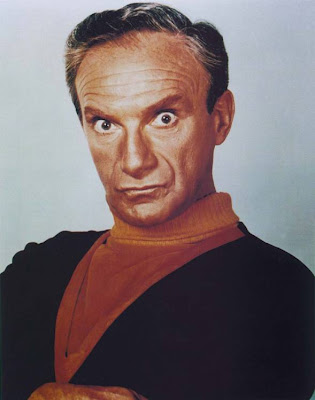 7. Smith is a doctor – why is he so fucking stupid when it comes to space?

8. Why didn’t the Robinsons push Smith out the airlock before the end of the first season? (Actually, that may be more pertinent than "Did they ever get to Alpha Centauri?" Not with that derpdoodle onboard.)

* This one has an answer. In the original unaired pilot, the trip was going to last 99 years, a time which warrants suspended animation. Irwin Allen, the show’s creator, was a notorious cheapskate frugal filmmaker. When the pilot was rewritten and reshot, he didn’t want to waste that expensive (and cool) footage of the suspended animation process.

Posted by Jennie Brown Hakim at 8:30 PM No comments: 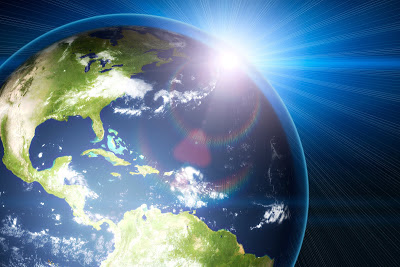 …is the question of whether or not life can exist on Earth in the years to come.

Who the President is, the Middle East, China, the Euro Zone, North Korea…none of these will matter if life can’t exist on Earth.

Illegal immigration, the death penalty, prison overpopulation, whether or not felons should vote…none of these will matter if life can’t exist on Earth.

Family values (whatever those are), abortion, rape culture, the mommy wars, work-life balance, who should be allowed to marry…none of these will matter if life can’t exist on Earth.

Women’s rights, LGBT rights, racism, classism, ableism, any other “ism”…none of these will matter if life can’t exist on Earth.

All of the words ever written by human beings won’t matter if life can’t exist on Earth.

We are at the turning point right now.

Once upon a time, people flew to the moon and left footprints there. A species capable of such a deed can find ways to save its own future here on Earth. I know it.

It just takes the will.

Posted by Jennie Brown Hakim at 5:51 PM No comments: 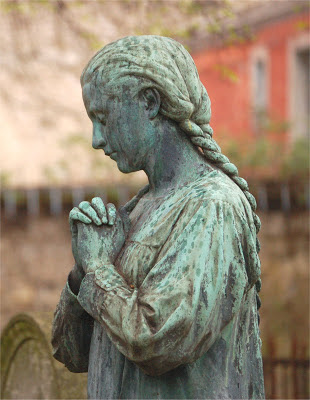 People all around the world have various belief systems. However, not all belief systems are good for people. Here are some red flags to watch out for.

Does your belief system…

2. Insist on obedience as a prime virtue?

3. Threaten dire punishments (on earth and in the afterlife) for not obeying the rules?

5. Have separate rules for males and females? Does it segregate the sexes?

6. Engage in bizarre and inexplicable rituals (such as pretending wafer and wine are flesh and blood)?

7. Tell followers what they can and cannot wear?

8. Tell followers what they can and cannot eat?

9. Tell followers what they can and cannot read/see/listen to?

10. Encourage or mandate corporal punishment for children and/or adults?

11. Claim that belief system officials have godlike power and perfection?

12. Tell followers that thoughts (not just acts) can be evil?

13. Ban harmless activities (such as dancing)?

14. Say that people who don’t follow the belief system are evil and damned?

15. Forbid followers to associate with non-followers – even family members?

16. Encourage followers to have as many children as possible (in order to create new followers)?

17. Promise a beautiful, fantastic afterlife (which no one has ever seen) in exchange for sacrifice and suffering in this world?

18. Claim that humans are innately evil, and only the belief system can redeem them?

19. Insist on humility and sacrifice on the part of the “average” follower (as opposed to officials), making personal concerns subordinate to the needs of the belief system?

20. Care only about the fate of the belief system, not its individual members, humanity, or the earth itself?

If even one of these characteristics is in your belief system, I advise you to stop and think. Even if your belief system says you shouldn't.(Especially then!)
Posted by Jennie Brown Hakim at 10:35 AM No comments: