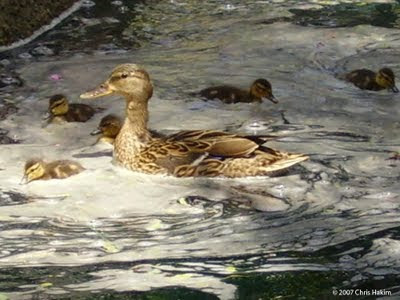 I used to live in an apartment complex which had artificial lakes populated by mallards. Every April, I looked forward to seeing fluffy little ducklings appear with their moms. It was a sign of spring, a sign of life beginning anew. (Sometimes, I would see ducklings in June, which I would call "late harvest" ducklings.)

I have since moved away from the complex, and I miss seeing ducklings in April. I know of few places where I know mallards congregate - the Fullerton Arboretum, for one, and a few parks not too close to where I live now.

So what? Despite high gas prices, a view of ducklings is worth the drive. It's a small joy that comes and goes before one knows it. Maybe tomorrow I will find a place to view ducklings.

("Maybe tomorrow"...doesn't that sound so sad?)
Posted by Jennie Brown Hakim at 3:40 PM No comments:

I am the kind of person who is extra-particular about what kind of soap will enjoy the privilege of connecting with my skin. For example, I will pay $5.99 for a single bar of specialty soap instead of paying the same for an eight-pack of a brand I would find at a supermarket. Yes, one bar of good is worth eight bars of mediocre.

Where did my soap snobbery begin? Where nearly everything else does, in childhood. The only soap that my mom would buy was Zest. Why, I have no idea, but those aqua-colored bars were the only ones we used – and I got tired of them real quick. 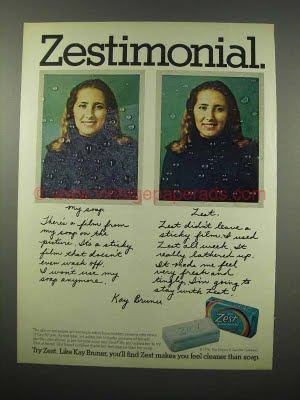 I hoped for some Dial once in a while, or Ivory or even Safeguard (see how low my standards were back then?), but when you are not in charge of the shopping, you have to accept whatever’s in the bag. To this day, I not only will not buy Zest, I won’t even touch it. Now, I doubt that Zest is significantly worse than any other brand of supermarket soap. But I have had more than my fair share of it in this lifetime, and enough is enough.

Years later, when I was in college and had little disposable income, a bar of soap became an affordable luxury. I haunted tiny boutique stores in Santa Monica, often carrying away one small bag containing a single bar of rose- or lemon-scented soap, or several guest-sized servings of same. Under the influence of Alexandra Stoddard (author of “Living a Beautiful Life” and other MM Best Books Ever), I chose soaps with ground vanilla beans and fluffy flecks of oatmeal. (It didn’t take much to make me happy.)

I would collect soaps when I traveled – often, it was the only item I wanted that I could afford in the store. I bought soaps faster than I could use them, and it took some thoughtfulness to make sure most of them got their turn in the bathroom. In time, nearly all of them did (and those who did not, Two Dogs and I gave away to friends).

Today, there are no bars of soap in the Hakim bathroom. Only shower gel. Two Dogs is fond of Avon Naturals, and I buy it in bulk when it is on sale. We have a lavender shower gel with an overpowering scent (Two Dogs said he could taste it in his beer). 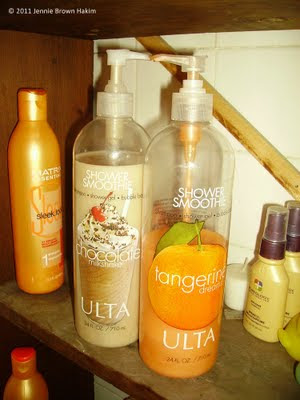 I also bought two 24-ounce bottles of combination shower gel/shampoo/bubble bath from Ulta (above). It was a buy-one-get-one-free deal. As with many things in life that don’t work out in the end, it seemed like a good idea at the time. Two Dogs likes the orange one, so he can have it. As for the chocolate…I know now that chocolate is something best experienced in 72% cacao squares and ice cream. Not in shower gel.

I’m going back to soap. I’ll be smart about it, buying one bar at a time and not buying another until the one I have is almost gone (unless I travel and go into a gift shop and see something special…I need to make room for surprises!). I will alternate between fruit and flower scents, and anything else that’s interesting. I will not buy soaps from regular supermarkets. “Natural” supermarkets, like Mother’s in Orange County, Sprouts, and Whole Foods, have excellent selections, but nothing that comes in an eight-pack. (That’s a good thing.) 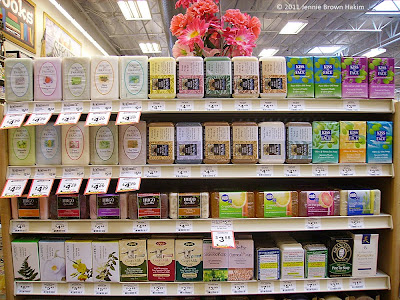 The "good guys" at the natural supermarket... 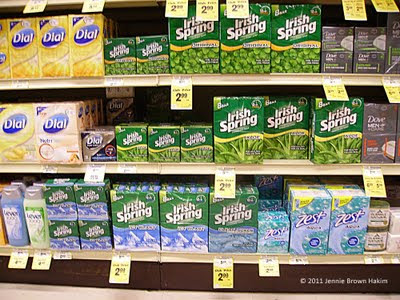 ...and the "bad guys" at the regular supermarket. (Notice the Zest in the bottom right-hand corner.)

P.S. I bought this lemon verbena soap from Trader Joe’s. It makes our bathroom smell like lemons. Yummy! 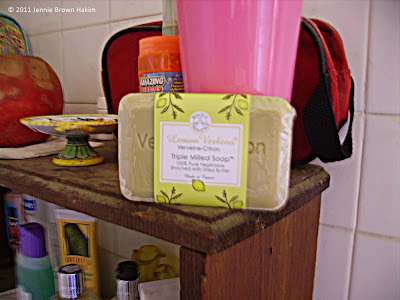 Posted by Jennie Brown Hakim at 2:55 PM No comments:

A little time machine from a yard sale

At a neighborhood yard sale not too long ago, I picked up this little gem: 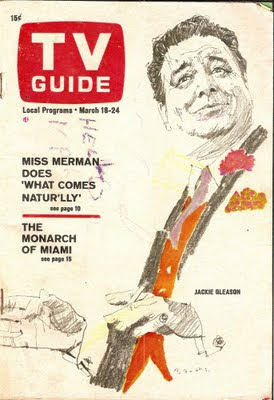 I may be one of the minute percentage of people who would call a TV Guide dated March 18-24, 1967 with a drawing (a actual pencil drawing, by Bernie Fuchs) of Jackie Gleason (Generation Y asks, “Who the hell is he?”) a “gem”. 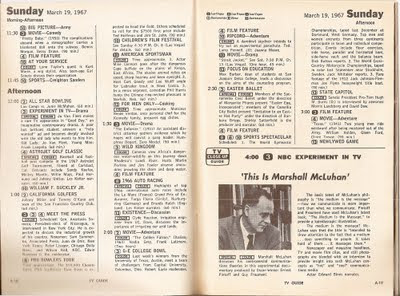 An hour-long show featuring an intellectual on network television? Where can I hitch a ride to March 19, 1967? (Meandering Mouse was around back then, but at one year and eight months old I was not yet prepared for the mind-blowing McLuhan experience.)

But 1967 wasn’t a good year for meandering mice of the four-legged variety. Take a look at this ad for D-Con: 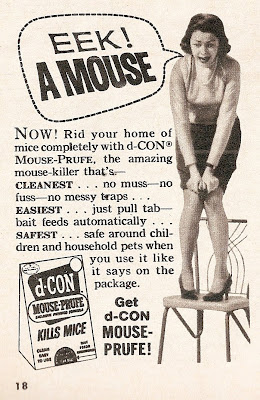 Somehow, the words “amazing mouse-killer” offend me much more than the imagery of a woman jumping on a chair at the sight of a tiny rodent. Maybe a dose of Midol will help:

It will change something more than your mood! 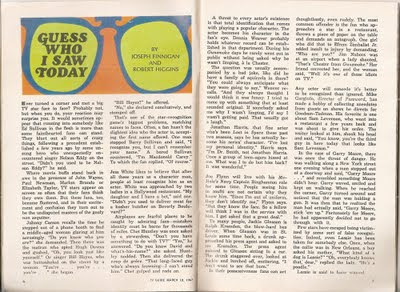 When was the last time you saw so many words on a magazine page?

Popular magazines are far from being scholarly journals, but in the golden age of the 1950s, 1960s, and 1970s, they gave people so many words – and so many ideas. Life and Look may have put celebrities on their covers, but underneath those famous faces, readers found well-researched stories and in-depth analysis of the issues of the day. Magazine publishers assumed that not only a.) you could read this much text, but b.) you wanted to read this much text.

What you will find in a 2011 TV Guide can barely be called reading at all. It’s word filler, much like those meat “extenders” that fast-food restaurants use to add heft to their hamburgers. If you try to “read” it, its meaning will slide right out of you, just like a fast-food burger slides out of your digestive system. You will have gained nothing, but have lost time.

This is why I will never stop collecting old magazines. Reading them is so much more intellectually enjoyable than reading (most) new ones.

Yard sales, for the most part, are not too rewarding for the prospective customer. These are the items that most people want to banish from their households for good – old clothes that haven’t reached the vintage stage yet, VHS tapes (how boxy and bulky they were!), and stacks of once-read Danielle Steel paperbacks.

Yet we always stop and look.

We never know when we will discover a gem hiding in the trash…a little time machine to a more thoughtful time (“I Dream of Jeannie” notwithstanding). 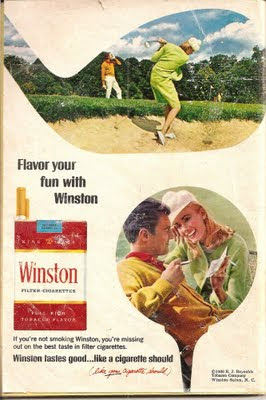 Savagery for stupidity: a bad trade

Terry Jones, a Florida pastor who famously threatened to burn a Koran last September 11th, made good on that threat on March 20, 2011. As proof, he videotaped it and put it on his website (I’m not putting that link on here). Jones and his followers pronounced the Koran “guilty” of “death, rape, torture of people worldwide whose only crime is not being of the Islamic faith.” (It has long been a crazy conservative tactic to blame the book.) Jones said that he has no desire to be in an anti-Islam movement. That is like someone saying that he has nothing against my husband and me, and then setting a match to a photograph of us. Jones is old enough to realize that it’s what you do, not what you say, that matters.

The world media ignored this event for the most part, except for the wire service Agence France-Presse. The news of the Koran burning eventually reached Afghanistan, and after that angry men ran amok, resulting in the deaths of 24 people, including seven UN workers.

Burning a Koran is lame and pointless. First of all, it’s far from the only copy – you can’t kill a religion by destroying a single so-called “holy book.” Second, it’s needlessly provocative. I am an atheist, but I know I won’t bring people over to my side by burning a Bible.

If I did, though, how responsible would I be for what happened next?

Jones said he was not responsible for the riot deaths in Afghanistan. He is right. Why couldn’t those Afghan Muslims have thought: “Well, an American jackass has burned a Koran. So what?” We can only be responsible for our own behavior (unless we are mentally ill); we cannot be so for that of other people, whether it be those in front of you or those on the other side of the world. Stupidity is bad enough, but to respond with savagery is like setting fire to a pyramid of feces. (If you’re reading this during a meal, pardon me for the gross imagery – but it is so fitting, isn’t it?)

Posted by Jennie Brown Hakim at 9:24 AM No comments: 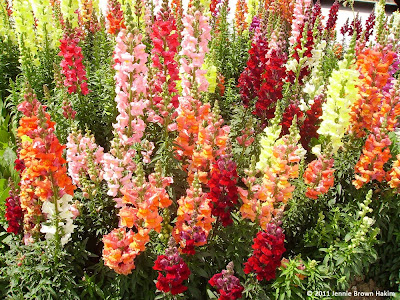 Posted by Jennie Brown Hakim at 11:20 AM No comments: